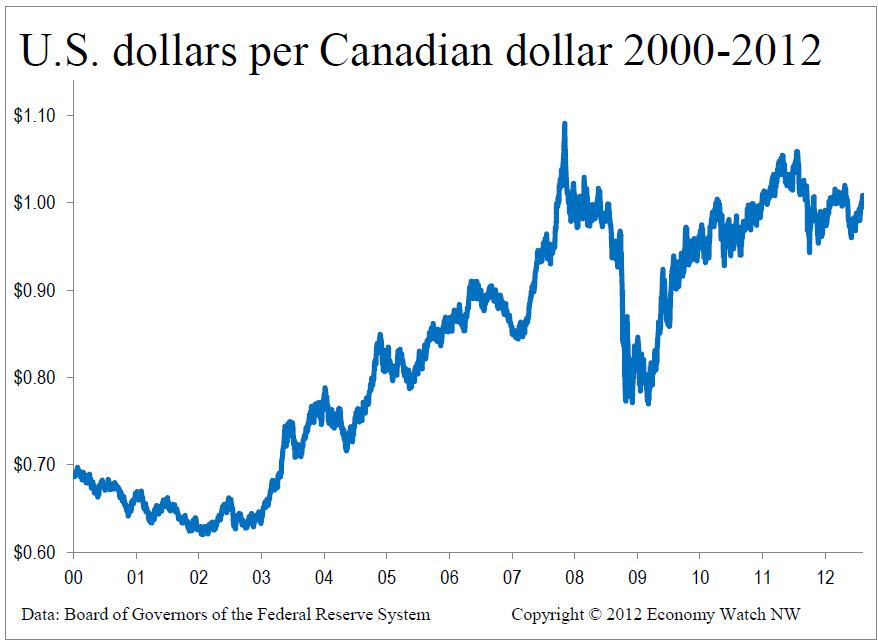 That’s the headline on Page 1 of the Seattle Times today. The article reports that some residents of the Bellingham area, an easy drive from the Canadian border, are grumbling that Canadian shoppers are overcrowding the parking lots of Costco Wholesale and other box stores on the U.S. side of the border.

My first reaction: Lighten up, folks. Second reaction: This is a first-world problem. We’ve much more important things to worry about.

Canadians’ inclination to shop in the U.S. reflects in part the relative strength of the Canadian dollar, trading currently at roughly parity with the U.S. dollar. Go back a dozen years and you’ll find a long period where the “loonie” was worth only 70 cents and even less (chart).

Some other thoughts: Canadians have “free” health-care, but it is financed with far higher taxes than any red-blooded American would put up with. Last I looked, British Columbia’s total sales tax was 12%. Washington’s sales tax is also high, 9.5% where I live, except in restaurants, 10%. But Washington is an income-tax free zone.

Roughly half of Americans make so little they pay no federal income tax. (Those who work do, however, pay substantial payrolls taxes.) Only the poorest Canadians pay no income tax. Rates for the federal tax in Canada start at 15% on income over roughly $11,000 and rise to a stiff 29% on incomes in the low six figures.

Provincial income taxes add to the tax pain. On a relatively modest income of $1,000 a week, a resident of British Columbia would pay over the course of a year combined federal and provincial income taxes of $14,459, almost 28%. That’s before payroll taxes. “Free” health care, it turns out, is not so free.  Old joke: If you think health care is expensive now, wait until it is free. But the main point is that prices are generally lower in the U.S. The Times article said a two-gallon jug of milk priced at about $5 on the U.S. side of the border costs almost twice as much on the Canadian side. High taxes, high prices, let’s go for a Sunday drive, eh?

There are analogues to Canadians flocking to the U.S. side of the border for bargains. Check out the parking lot of the Costco outlet east of the Portland airport. Half the cars have Washington plates.  The same was true the last time I was there at the Cabella’s outlet in Post Falls, Idaho, a stone’s throw from the Washington border. Oregon has no sales tax. Idaho’s is modest in comparison with Washington’s.

Those Costco customers trying to stuff a 48″ TV into the back of a Washington-plated MiniCooper at the Costco near Gresham technically owe Olympia up to 9.5% of the purchase price. Don’t hold your breath waiting for voluntary compliance.

Canadians have the money to take a car ride for a bargain. Canada’s economy has done better than that of the U.S. since the financial crisis. Canada’s few national banks are and were more tightly regulated than their American counterparts. They avoided the housing bubble and bust and didn’t need to be bailed out with taxpayer funds. Canada makes a lot of money selling resources to growing markets in Asia.

Canada is a destination for rich Chinese getting their children, their money and (occasionally) themselves out of China. These migrants are looking for things currently not on offer in China, including clean air and water, safe food, good education and the rule of law.

And Canada is pulling off a neat trick, “exporting” education while keeping the jobs at home. The Financial Times reports that revenues reaped from Chinese exchange students in Canada, including tuition, fees and personal spending, “now exceed those from any other area of trade with China, including natural resource products.” Nice work if you can get it.

Too many Canadians? Not in my book. Come as you are, and stay a while.