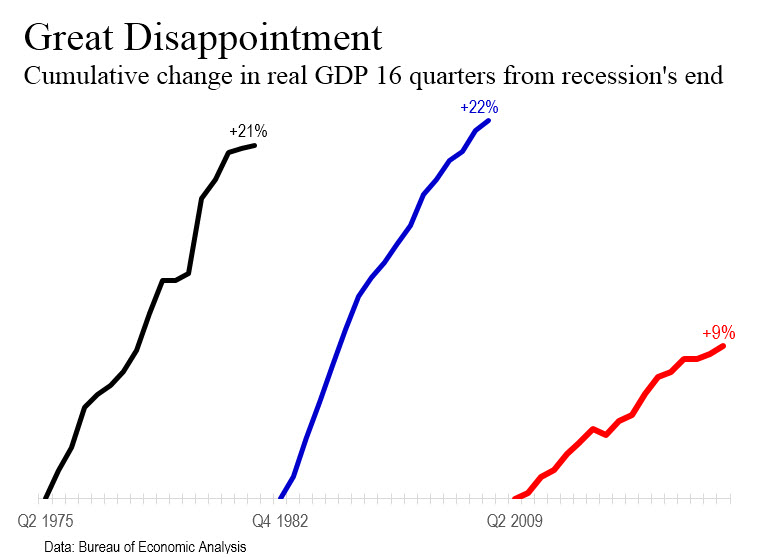 The Great Recession (January 2008-June 2009) was less severe and the recovery stronger than we thought at the time. But it was still the worst economic decline since the Great Depression. And the recovery remains the Great Disappointment.

Uncle Sam in late July published national income and product accounts updated and revised all the way back to 1929. The Bureau of Economic Analysis, keeper of the statistics, comprehensively revises national accounts once every five years to keep pace with the ever-changing U.S. economy.

A few changes are remarkable. Revised accounts recognize spending by business and government on research and development as investment (in effect, additions to capital stock) rather than consumption. In a related change, a new category of fixed investment, intellectual property, was added to the investment tables. Accounting for defined benefit pension plans was significantly changed in a way that now accounts for promises made but not yet kept, otherwise known as unfunded liabilities.

To reflect the changes, I’m updating some charts I will use during a talk to the CFA Society Spokane August 29. One in particular illustrates why it is still right to call this recovery the Great Disappointment. 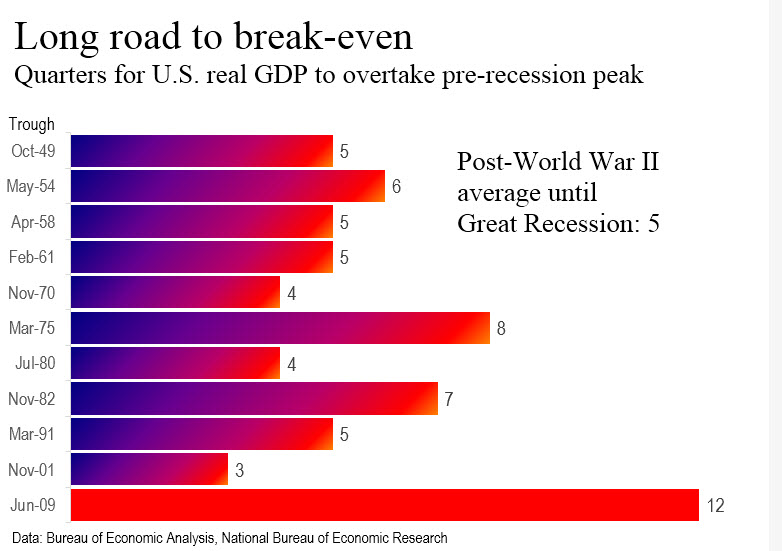 The U.S. economy has experienced the kind of broad decline we call recession 11 times since the end of World War II. Until the Great Recession, the two lengthest recessions were each 16 months, 1973-75 and 1981-82. The Great Recession lasted 18 months, January 2008-June 2009.

We have four years — sixteen quarters — under our belt since the recovery began. The top chart shows that at a comparable stage of the recovery from the 16-month recessions in the 1970s and 1980s, the economy had expanded roughly twice as much (21% and 22%) as it has this time around (9%).

The lower chart is just one way of illustrating the same point. On average since the late 1940s, the U.S. economy had overtaken its previous high within about five quarters after stumbling into recession. This time around it took 12 quarters.

That’s something of an improvement. Before Uncle Sam comprehensively revised the national income and product tables, estimates showed it took 16 quarters to reach a new high. So, it’s great that the Great Recession was shallower and the recovery a bit steeper than we previously thought. But the recovery still richly deserves the moniker Great Disappointment.