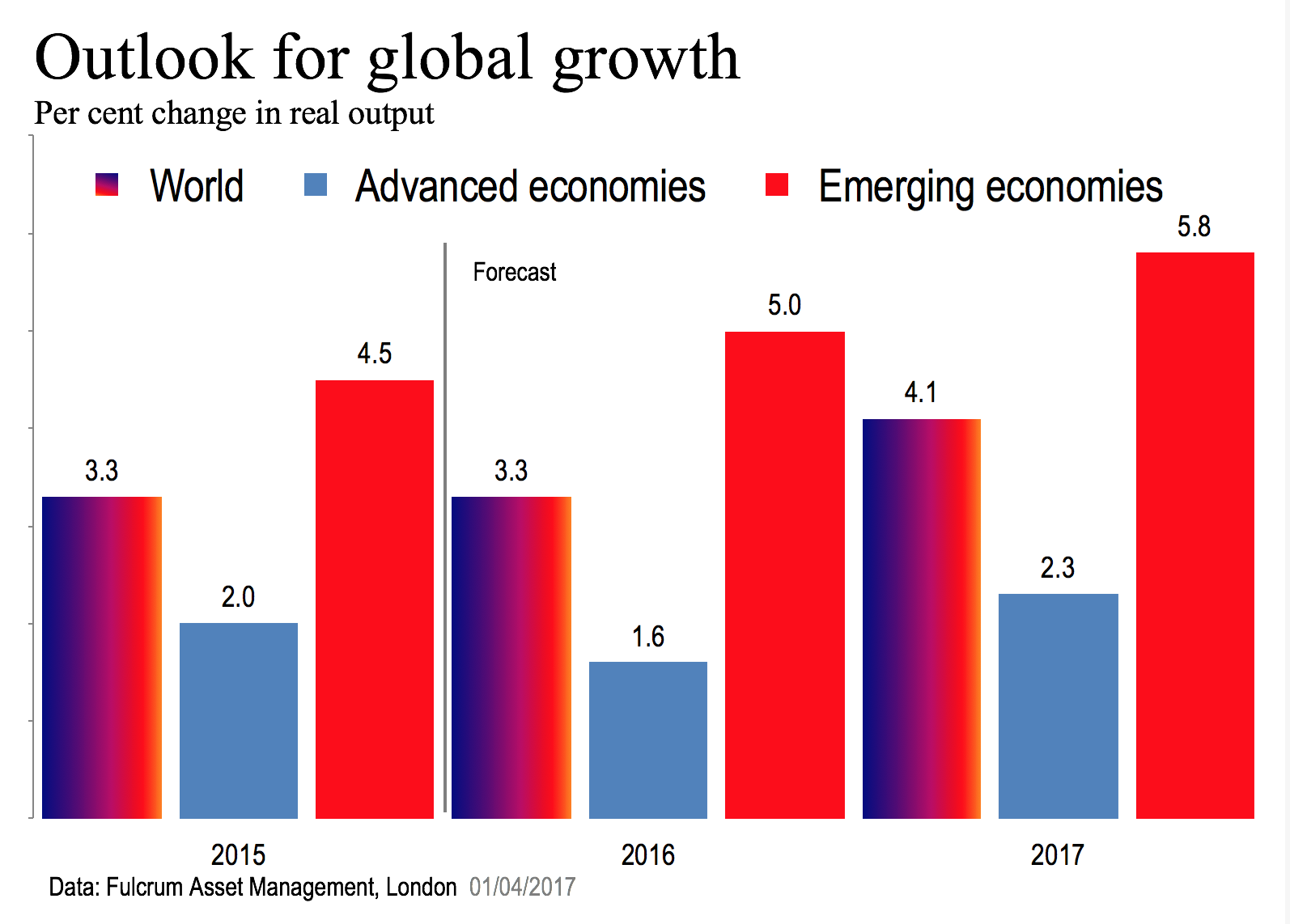 The global economy is likely to grow at between 3% and 4% in 2017 adjusted for inflation and differences in exchange rates. Emerging economies, led by Asia, are likely again to outgrow advanced economies (the U.S., Europe, Japan).

That’s the word from one of the world’s most respected and widely followed financial journalists, Martin Wolf, chief economics commentator of the Financial Times.

Wolf relies in part on the work of Gavyn Davies, formerly in charge of global economic research at Goldman Sachs, Davies is the founder of Fulcrum Asset Management, London and New York, and a blogger on macroeconomics for the Financial Times.

Wolf writes that two powerful forces help drive global economic growth: innovations at the frontier or edge, primarily in the U.S., and catch-up elsewhere. They are, he observes, interrelated: the more the frontier economies innovate – the richer they get – the more there is room for the laggards to catch up.

Wolf gives this example: China’s output per person rose 23-fold between 1978 and 2015, yet China was so poor at the start of that period that its output per head at the end was only a quarter of U.S. levels. So China has a lot of ground to make up and thus good prospects for much higher growth. The same is obviously true for India. Until the recent unpleasantness resulting from demonetization, it was one of the fastest growing economies in the world. Yet India’s output per head is only about a tenth of the U.S. level.

So there is plenty of runway for global growth. But that outcome is anything but a sure bet. Wolf ticks off the obvious risks that are on almost everyone’s radar screen, notably including a possible breakup of the eurozone and a possible financial crisis in China resulting from its huge build-up of debt.

Wolf lists several other geopolitical risks. Among them, the possible election of an extreme nationalist, Marine Le Pen, to the presidency of France; Vladimir Putin’s drive to restore the lost glory of the Soviet Union; trade friction between the United States and China; general friction between Iran and Saudi Arabia; the possible overthrow of the Saudi royal family.

A year ago, Wolf worried about the possible exit of Great Britain from the European union and the possible election of a “bellicose ignoramus” to the U.S. presidency. “Both have come to pass,” Wolf writes, adding “The implications of the latter remain unknown.”

Also unknowable, writes Wolf, are the implications of the fact the most powerful political figure in the world has little apparent interest in whether what he says is true or not. “All we do know,” Wolf concludes, “is that we will all be living dangerously.” Amen.