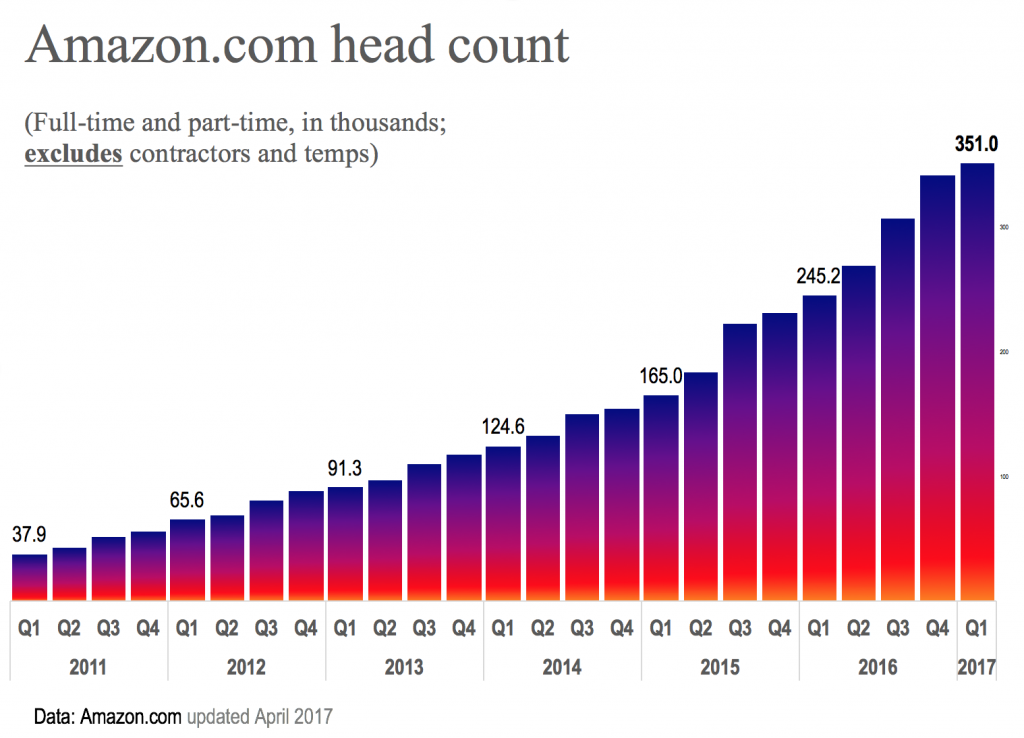 Buried in yesterday’s knockout earnings report from Amazon.com is detail that will further encourage Amazon bulls but disappoint anyone trying to get a job at the Everything Store.

In the quarter to the end of March, Amazon added a mere 9,600 to its army of full- and part-time employees, for quarter-to-quarter head-count growth of only 2.8%, the smallest percentage increase in at least six years. In calendar 2016, Amazon head count grew by nearly three times as many, an average of almost 28,000 a quarter.

The chart illustrates Amazon’s head count growth by quarter since 2011. To say it has been adding people at a frantic pace is understatement. In six years, Amazon’s roster of full- and part-time employees has grown more than nine-fold. The average annual increase comes to 44.3%. Even with the first-quarter slowdown, the average head-count increase over 12 months to the end of March is 43.1%.

How many people work for Amazon in its home state? Amazon plays its cards close to its vest. A web site devoted to illustrating economic impact by state puts the Washington head count at about 40,000. It is not clear how often Amazon updates the web site. But the number is consistent with payroll data submitted to the state by Washington employers.

What is called the Quarterly Census of Employment and Wages produced by Washington’s Employment Security Department indicated there were about 39,400 employed by 523 firms in a category called “electronic shopping” in third quarter of 2016, at an average weekly wage of $2,890. Given the high pay, more than $150,000 annually, the vast majority of those likely work at Amazon.

The Puget Sound Business Journal reports that Amazon is well on its way to occupying 12 million square feet of office space in the Seattle area by 2022. At a rule-of-thumb 175 square feet per person, the space would accommodate roughly 68,000 employees.

Most of the space is in Seattle proper, but Amazon recently confirmed that it is the tenant for a new office building in Bellevue that will open in summer. 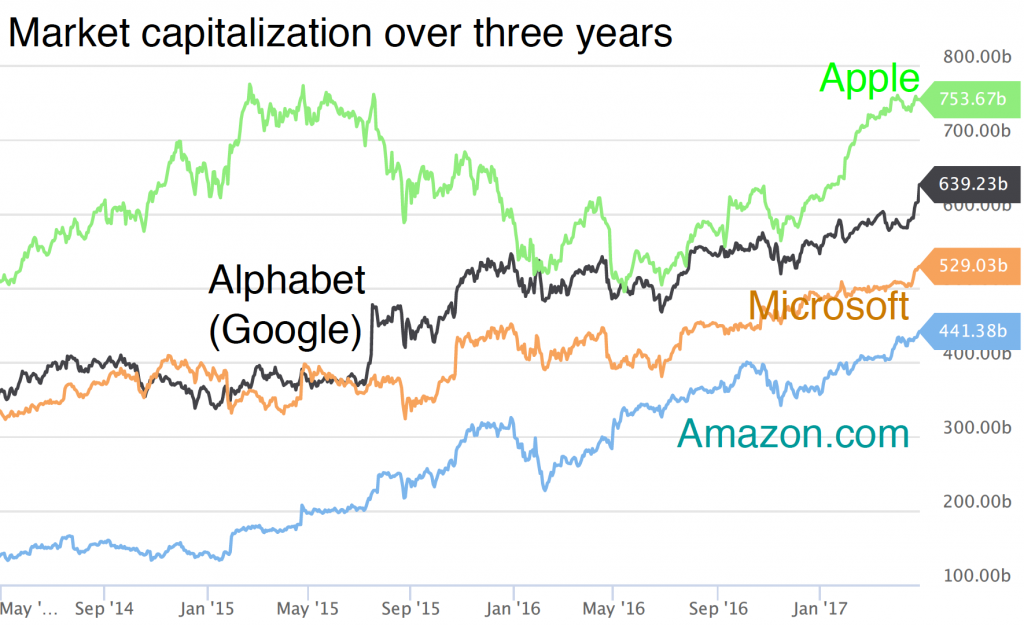 Amazon stock has been on fire, especially over the past couple of years. The chart shows how its market capitalization (the value of all stock outstanding) compares over three years with peers such as Apple, Google (technically Alphabet) and Microsoft.

Data from the web site finviz.com show Amazon.com, with market cap at $441.4 billon as of April 28, ranks as the fourth most valuable U.S. company behind, in order, Apple ($751.7 billion), Alphabet (aka Google) ($649.2 billion) and Microsoft ($529.0 billion), and ahead of, in order, Facebook, Exxon Mobil, Berkshire Hathaway, Johnson & Johnson, JPMorgan Chase and Wells Fargo.

It is far and away the fastest-growing of the other nine over the past couple of years. The chart (chart courtesy of stockrow.com) compares Amazon.com’s market capitalization over three years with those ahead of it in the market-cap league tables. Our hunch is that it will be moving up in value. Stay tuned.