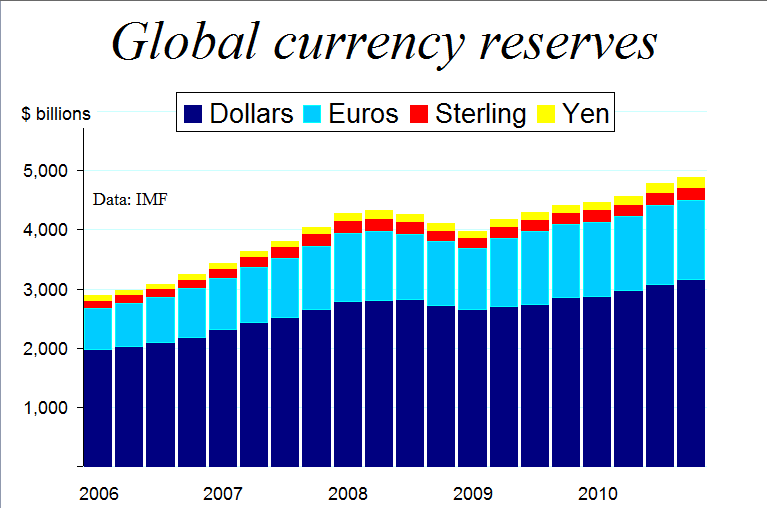 Is the dollar’s long run as the global reserve currency coming to an end? It is if the Chinese have anything to say about it. China owns the globe’s largest store of dollar-denominated assets outside the U.S. Understandably, it wants to diversify. The world needs an “international reserve currency that is disconnected from individual nations,” says People’s Bank of China Governor Zhou Xiaochuan, China’s Ben Bernanke.

China is upset with U.S. monetary policy, particularly with low interest rates. China keeps its currency more or less pegged to the dollar, in part to keep the prices of its massive exports to the U.S. low. The peg means China must wrestle with inflation that results in part from low U.S. interest rates. Annoyed at the high gas prices? Imagine how annoyed the Chinese are at the rising prices of, among others, oil, copper and iron ore.

By definition, a reserve currency must be freely tradeable and highly liquid. The problem with finding a replacement for the dollar is that there are just not that many candidates. The Euro is highly liquid, but the currency is saddled with the uncertainty arising out of the spendthrift ways of peripheral countries, the so-called PIIGS (Portugal, Ireland, Italy, Green and Spain). Besides, as the chart shows, the volume of dollar reserves in global markets amounts to more than twice the volume of Euros.

Other currencies, and the economies behind them, don’t amount to much compared with the U.S. and Eurozone. Dollar reserves are roughly 16 times global reserves of sterling and yen. Special drawing rights — so-called SDRs, baskets of currencies — have their own disadvantages.

China passed Japan last year as the world’s second-largest economy. Until very recently its currency was not convertible. Chinese citizens are still not allowed to trade yuan for assets denominated in other currencies. But China is starting to loosen its grip.

The Wall Street Journal reported April 20 that “China is accelerating efforts to push its currency deeper into world markets, racing ahead with a series of moves toward a new financial ecosystem with the yuan at its center.” The article quoted a “senior Hong Kong monetary official” as saying that China is “actively considering” new rules that would make it easier to bring yuan from Hong Kong into the Chinese mainland. The Journal’s article reported that

Changing those rules would remove a choke point threatening the fast-growing market for the Chinese currency — also known as the renminbi [RMB] — that is developing in Hong Kong and elsewhere outside mainland China’s borders. Currently, Chinese officials have to approve bringing any sizeable amount of currency — foreign and domestic — into the country. That system is aimed at closely managing the exchange rate and preventing speculation in the yuan.

Yet the idea that the RMB will knock the dollar off its throne any time soon is premature. “Full convertibility could be a long way off, and China may opt to stick with limited convertibility.” A Journal sidebar quoted Xia Bin, an adviser to the People’s Bank of China, as saying that China should aim for full convertibility in 10 years. Domestic considerations complicate China’s push to make its currency more convertible. As the Asian edition of the Wall Street Journal noted April 20:

Balanced against the benefits of a stronger yuan are concerns about the potential impact on exporters, who employ a huge share of China’s work force. Many of them operate on thin profit margins. Concern about exporters is one reason top officials have long insisted that any change in the yuan must be measured. “We will further increase the [yuan’s] flexibility according to the market,” [Premier] Wen [Jiabao] said last month. “But we must also keep in mind that this kind of reform is gradual, because it affects companies and employment.”

Writing in the Financial Times in February, Alan Beattie said the most likely outcome is a “gradual shift to a multipolar currency world, reflecting increased use of currencies other than the dollar in global trade and finance.” China’s currency could perhaps pose a threat to U.S. dollar dominance in 10 or 15 years. The shift might come sooner if the U.S. fails to control its trade and fiscal deficits. Beattie writes:

The transition is likely to prove less dramatic than a grand international conference in which the dollar is ceremonially stripped of reserve currency rank and its spurs handed to gold or to the SDR. But [controversy about the dollar’s reserve status] is a warning to Washington nonetheless. [Beattie quotes Uri Dadush, a former senior World Bank official now at the Carnegie Endowment]: “The US should be worrying more about whether its economic policies are a threat to the dollar now than whether a threat to the dollar will derail its economic policies in the future.”

That statement would get a thumbs up, I suspect, from most Americans, and, wonders of wonders, even most Chinese.