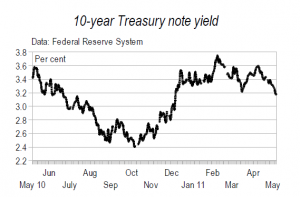 Interest rates were supposed to go up when the end of quantitative easing (printing money) came into focus. That was the gospel according to Pimco’s Bill Gross, who dumped all his Treasuries, who indeed went short the U.S. government-bond market.

But as the chart shows, the benchmark rate on 10-year Treasury notes has been trending down, not up. The yield has fallen about 40 basis points (11%) since April 11 and nearly 60 basis points (15%) since early February. Those are huge moves in the bond market. To the extent Gross has been short Uncle Sam’s paper the past few weeks, he’s been on the wrong side of the trade.

What the rate decline says to me is that the U.S. economy is still having trouble reaching “escape velocity” — a rate of sustainable growth without the apparent need of government tinkering and stimulus. Rates would be going up, not down, if the economy were stronger. The news over the weekend from Zillow that U.S. house prices fell 3% in Q1, the sharpest decline in more than two years, is consistent with falling interest rates.

The Great Recession has been over for nearly two years. Stock investors have done extraordinarily well since March 2009. Wall Street is back in business. The big banks that are too big to fail are bigger than ever.  But Main Street continues to look threadbare, far from prosperous.