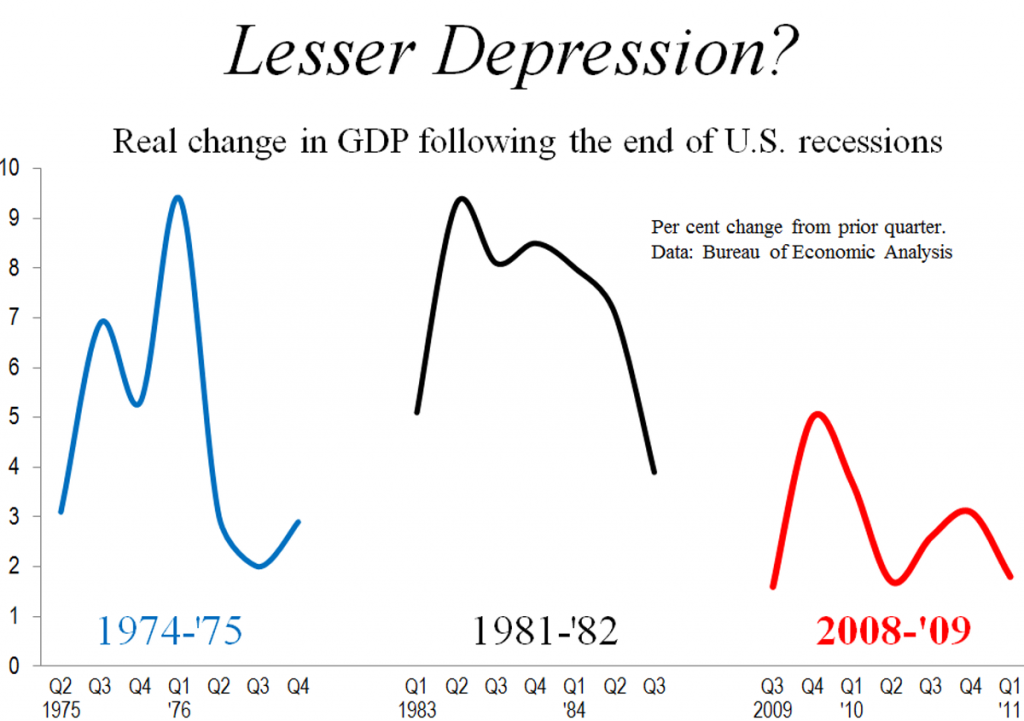 What to call the period that arguably began in 2006 when the rich world’s housing market peaked? The Financial Times (FT) in a Lex column May 13 uses a term I have not seen before: “Lesser Depression.”

The U.S. economy typically rebounds strongly following a recession. The 1974-75 and 1981-82 recessions both were long (each 16 months). By the fourth quarter following the trough of the 1974-75 recession, the U.S. economy was growing at a real (inflation-adjusted) rate of 9.4%. After Paul Volcker crushed Carter-era inflation with double-digit interest rates, the U.S. economy went on a tear. Real growth averaged 8.2% in the second through the fifth quarters after the trough of the 1981-82 recession. The current recovery has been anemic. The growth rate peaked at about 5.0% in the second quarter after recession’s end; the growth rate has averaged only 2.3% in the four most recent quarters.

As a speaker, I’ve used a number of labels for the post-housing-bubble period. “Great Recession” seems right for the longest recession since the Great Depression, 18 months through June 2009 (as determined the independent National Bureau of Economic Research). My preferred term for the recovery is “Great Disappointment.” Nearly $1 trillion of stimulus has failed to reduce the unemployment rate much. Housing, which usually leads the U.S. out of recession, remains mired in doldrums, and no wonder. Roughly a third of houses with mortgages are under water, worth less than what is owed.

The “Panic of 2008” is surely the right phrase for the frantic weeks after Lehman Brothers Holdings went down on Sept. 14, 2008. Banks, not knowing which counter party might fail next, stopped doing business with one another. The system briefly froze, and the global economy went off a cliff. In quick succession, AIG tottered, Washington Mutual failed, and Fannie Mae and Freddie Mac became wards of the government. Uncle Sam literally crammed billions down the throats of all major banks to stop the panic. In a sense, the Panic of ’08 continues. No one knows whether European banks will be solvent after Greece and Portugal restructure their debts.

Is “depression” too strong a word? Technically, as the FT notes, there has been no depression. Output in the leading advanced economies fell only about 7% from 2007 to 2009. GDP per head in these economies this year will run only about 3% below the previous peak.

The FT was apparrently inspired by a report from London-based Monument Securities, which pointed out that

. . . there has been another sort of depression: a prolonged period of suboptimal activity, in spite of aggressive fiscal and monetary policy. Almost all rich countries are still stuck with a toxic mix of below-peak production, negative real policy interest rates [meaning interest rates below inflation rates], high unemployment and government deficits.

That the effects of policy responses have been “much less than hoped for,” says the FT, should not surprise. We are mopping up after many years of financial excess and resulting misdirected investment. Regulators the world over are keeping bankers on tighter leashes, the FT notes, which aims to correct the first problem. Only the passage of time will solve the second problem.

The argument still rages about what finally ended the Great Depression – time, correct policy, war. In any case, it took a decade or more. The Lesser Depression is not even four years old; it could last for a while yet.

Lesser Depression. In a way that other characterizations don’t, the phrase captures the extreme duration and severity of Panic of ’08-Great Recession-Great Disappointment. The phrase gives the devil his due, and most certainly distinguishes this painful stretch from garden-variety recessions since the Great Depression. I won’t be surprised if it has legs.