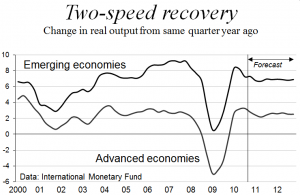 It has been nearly four years since the collapse of two Bear Stearns hedge funds (June 2007) signaled the start of the global financial crisis, not quite three since the failure of Lehman Brothers Holdings (Sept. 14, 2008) sent banks into a panic and pushed the tottering global economy off a cliff.

Economic data show global output has recovered to roughly the levels of late 2008 (chart). The recovery is two speed, to be sure, with much higher growth in China, India and other emerging economies than in the advanced economies, mainly the U.S., Europe and Japan.

But what if we are still in the middle stages of a “Lesser Depression“? What if the global financial crisis is not really over yet?

It is the question that keeps Joe Dear awake nights. If the name rings a bell, it is because Joe Dear ran the Washington State Investment Board until March 2009, when he was lured away to become chief investment officer of the California Public Employees’ Retirement System (CalPERS). What is on Dear’s mind should be of more than passing interest. CalPERS manages more than $230 billion for the benefit of more than 1.6 million California employees, retirees and their families.

Writing in the Financial Times today, Dear opined that we are not there yet, that the crisis is really not over. He cites a laundry list that should be familiar to almost everyone who is paying attention. The U.S. is stuck with high unemployment, slow job growth and declining housing prices. The fiscal positions of goverments — federal, state and local — are precarious.  Dear writes that

Governments still face daunting choices and are vulnerable to policy mistakes that could reignite the crisis. We have obvious problems in Europe with the potential contagion of the debt crisis threatening the European banking system. Even the economic recovery in the US is largely a product of, and dependent on, government intervention. The federal government guarantees over 90 per cent of all mortgages issued today for housing, and the Federal Reserve’s massively levered balance sheet supports extremely low interest rates.

Meanwhile, the world economy is slowing. U.S. GDP growth was anemic in Q1, just 1.8% at an annual rate.  Surveys of purchasing managers show manufacturing slowing — in the U.S., in China and elsewhere. The wisdom of the bond market is that the economy is slowing. Investors yesterday were willing to lend Uncle Sam money for 10 years at a yield of less than 3.0%, a huge decline from just a few weeks ago.

Winston Churchill famously said — I’m paraphrasing — that Americans can always be counted on to do the right thing eventually, but not until they’ve exhausted all other possibilities. Joe Dear guesses that America will eventually muddle through economically, “holding on with just enough of the right decisions, close enough to the right time to sustain the economic growth on which so much depends.” Let’s hope he is right.