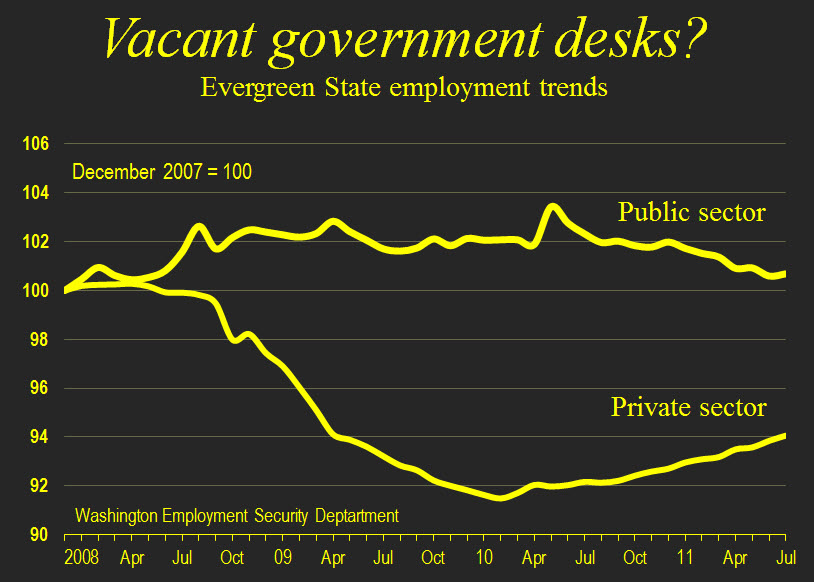 Today’s brutal report on the labor market from Uncle Sam reminded me that the Seattle Times (where I once worked) the other day conjured the image of vast expanses of state office space bereft of employees (here’s a link to the article).

State government employment has declined two years in a row, The Times reported rather breathlessly, costing 4,700 jobs, or more than 7% of the state’s work force.

Cue the violins? Well, no.

It is not until the sixth paragraph that the reader is apprised of a key disclaimer: “Excluding higher education and K-12 jobs.” That’s important because more state employees work in education services than in general government. Turns out the impression of a dramatic shrinkage of state head count is a bit of a stretch.

Beyond that, the numbers don’t square with employment data published regularly by Washington’s Employment Security Department. Using the historical series published by ESD, I calculate that total state government employment (including education) averaged 150,383 for the 12-month period ended in July (latest data available), down only 1,667 (1.1%) from the calendar 2010 average. The trailing 12-month average is virtually unchanged — down 92, less than a tenth of 1% — from the calendar 2009 average.

I haven’t had the chance to ask the state’s Office of Financial Management, the apparent source of the data, about the figures. But it is worth remembering there’s common sense behind the adage that “figures can lie.”

In fact employment has held up much better in the public sector during this Lesser Depression or Second Great Contraction than in the private sector. The chart, based on data collected jointly by the state and Bureau of Labor Statistics, shows that employment in the private sector, though improving for more than a year, remains about 6% below where it was in December 2007, the start of the Great Recession. Employment at all levels of government in Washington  — federal, state and local , the “public sector” in the nearby chart– in July stood at about 3,700 (0.7%) higher than in December 2007.

Did I mention that more people work in the public sector in Washington than in any other major sector? Or that workers in government outnumber workers in manufacturing by more than two to one?

Slashing public payrolls is exactly the wrong thing to do with the economy as fragile as it is. I wish the public sector hadn’t gotten so large, but now is not the time to cut it down to size.

On the other hand, it is never too soon to address the real threats to our long-term fiscal sustainability. These are out-of-control health care costs and entitlement programs (Social Security, Medicare, the prescription drug benefit for seniors) that, unmodified, will bankrupt us.

Relatively modest adjustments in the retirement age, tax rates, benefit levels and the related inflation formula for benefits would make these programs sustainable and insure they will be available to our children and grandchildren. These changes should be phased in over a period of years so that retirees and those approaching retirement have time to adjust their spending and savings. The sooner we get started, the less severe the adjustments will have to be.