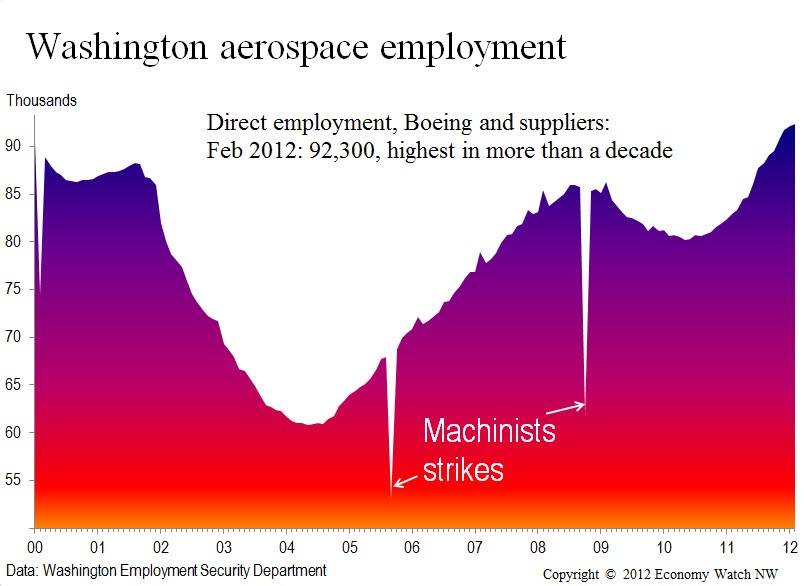 Aerospace-related manufacturing employment in Washington reached 92,300 in February. For two months running, the level has been higher than at any time in more than a decade; the last time we were in this neighborhood was November 1999, at 91,700.

It is hard to overstate the importance of Boeing-related employment to the economy of the Puget Sound area, Washington and the Pacific Northwest.

A very large share of these jobs are the kinds of family-wage blue-collar jobs that have migrated to China and other low-wage countries over the past 20 years. They are among the highest paid jobs in our economy. The last time I looked, only software jobs paid more on average.

Aerospace-related employment in Washington has risen by 12,200 since May 2010, a bit less than 500 jobs a month. The sector accounts for more than 32% of all manufacturing jobs in the Evergreen State.

I expect aerospace-related employment in Washington, always highly cyclical, to flatten in the not-too-distant future. Boeing will be increasing production of the 737 at Renton, but it will also be hoping for increased productivity, especially from its blue-collar workers.

Boeing-related employment has exceeded 100,000 several times in the post-World War II period. I was a newspaper reporter back in the late 1960s, when Boeing employment plunged from more than 100,000 to about 38,000. That was when the famous billboard went up on the edge of town asking the last person leaving Seattle to please turn out the lights.

Easily-accessible electronic data on sectoral employment in Washington State go back to 1990, when there was a break in series. They show that aerospace-related employment was 115,300 at the beginning of the 1990s. I plan to poke around various web sites to see if I can’t find electronic versions of paper records of aerospace employment from the 1940s through the 1980s that are rotting away in a library somewhere. Watch this space.