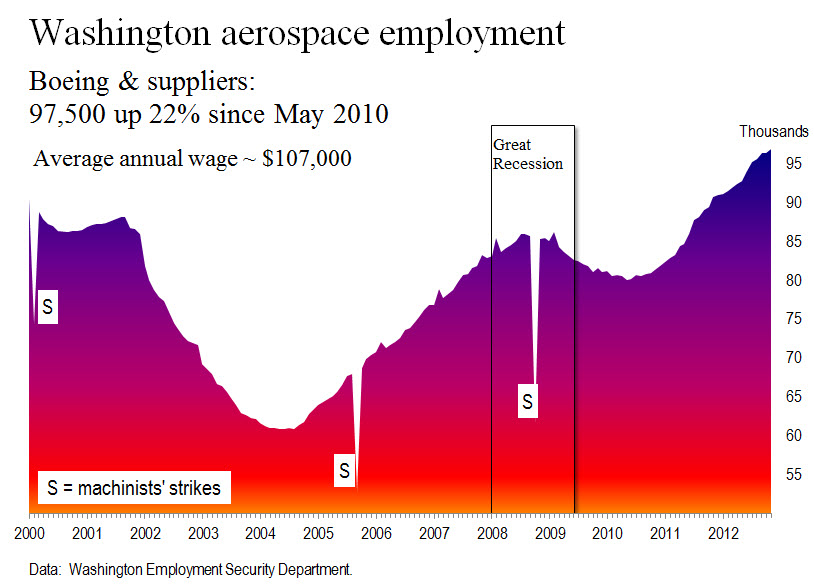 I wish it were otherwise, but no matter: If Washington State’s economy were a stock, I’d be tempted to go short*.

I’m no expert. I know only what I read. My gut tells me that the longer the 787 remains grounded, the more likely Boeing will have to redesign the electrical system. If that happens, Boeing’s 787 production lines in both Everett in Charleston, S.C., would most likely stop. In the event, Boeing’s shareholders, who’ve taken only a minor hit, a little around the edges, so to speak, are likely to be faced with a substantial haircut.

The Seattle Times reported on Jan. 30 that “[m]ore than 100 of the lithium-ion batteries have failed and had to be returned to the Japanese manufacturer, according to a person inside the 787 program with direct knowledge. … The frequency of battery failures reflects issues with the design of the electrical system around the battery.”

Also on Jan. 30, the New York Times reported that “Even before two battery failures led to the grounding of all Boeing 787 jets this month, the lithium-ion batteries used on the aircraft had experienced multiple problems that raised questions about their reliability.”

Americans have notoriously short memories. But frequent fliers tend to be smarter than average. At the very least, Boeing is accumulating a large public-relations deficit.

Stopping production for anything longer than a few days almost certainly would mean layoffs. An engine that has been driving the Washington/Puget Sound/Charleston economies forward would abruptly shift into reverse.

Washington’s economy was a big beneficiary, oddly enough, in the 787’s birthing problems. Many more pairs of hands were needed at Everett to rework 787s, to fix the problems that accumulated when Boeing’s Chicago-based management outsourced so much of the new plane to supplier-partners, many new, around the world.

There’s lots more to the employment ramp than fixing 787s. Boeing has just started pushing production of the 737 to 38 planes a month, a milestone on the way to 42 a month by the end of next year.

Since the summer of 2010, Boeing and related suppliers have been on a hiring tear in Washington state, adding head count at the rate of nearly 600 a month. Total aerospace employment in Washington as of December stood at 97,500, the highest in more than a decade (see chart).

Keep in mind these are some of the highest-paying jobs in Washington’s economy. Employer payroll-tax returns indicate that average pay — never mind health care and other fringes and benefits — is more than $100,000 a year. Only in software publishing (Microsoft, Adobe, Google, etc.) is average pay higher. Any layoffs will bite and will bite hard.

What about Boeing’s record backlog? Will customers flee? Honest answer: I don’t know, I doubt anyone does.

But here’s the thing: Where would they go? Both Boeing and Airbus both have bulging order books, backlogs that have been growing rather than shrinking. Airbus is developing a 787 competitor, the A320NEO (for New Engine Option), that it claims will be even more fuel efficient than the 787, advertised as 20%  more fuel-efficient than the planes it will replace. But the new Airbus entry won’t be ready until mid-year next year at the earliest, and I’ve read that the model is having its own birthing problems. 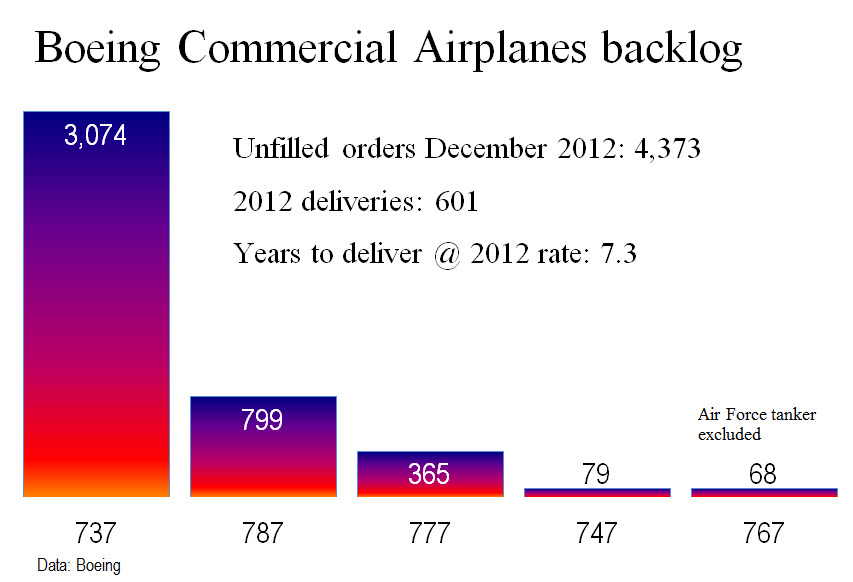 China absolutely wants to get into the business of producing commercial passenger jets; some Airbus models already are assembled there. But China will start with smaller single-aisle planes that may eventually compete with the 737. Russia also wants to elbow into the business. Canada and Brazil build relatively small passenger jets. None will have anything to compete directly with the twin-aisle 787 or A320NEO for many years.

Boeing’s 787 customers need deliveries, and need them soon. Existing fleets were never designed for a world of $100 a barrel jet fuel. Roughly half of the Boeing and Airbus jets scheduled to be delivered in the next decade will be for replacement rather than incremental air-traffic growth. And the global economy is slowly warming up. If I add it all up, I doubt Boeing’s record backlog (chart) will melt away.

I wish I could say the same for Washington’s aerospace head count, for its sales tax revenue and for its economy. In a column about Boeing’s troubles published in the January 20 issue, my friend Jon Talton, the Seattle Times economics columnist, summed things up tersely:  “Anxious weeks await.” Indeed they do. Fasten your seat belt, economy-watchers, we may be in for a bumpy ride.

*In a short sale, I would sell stock that I had borrowed, with the hope of replacing it later at a lower price. Short-selling is common in the stock market, but dangerous. A little ditty, courtesy of my friend, the late and great Zeke Robbins, serves as a reminder of this:

He who sells what isn’t his’n
Must buy it back or go to prison.