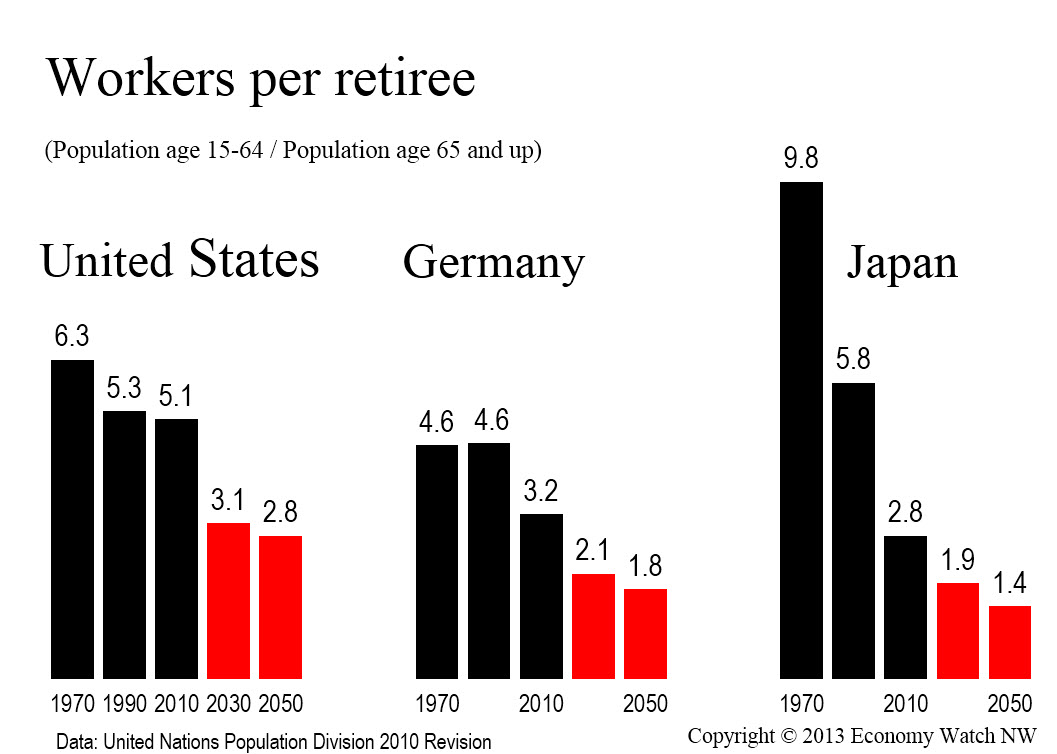 Do Malthusian nightmares about the population explosion keep you up nights? Relax. Chill.

We Americans (numbering 315 million) are having too few babies. Middle-class fertility has fallen to about 1.6, far below the replacement rate of 2.1. That means fewer workers to support your Social Security benefits.

And the problem is global. Most of the world’s people — there are roughly 7.1 billion of us, according to the U.S. Census Bureau — live in countries with falling fertility.

All of this is set out elegantly in a short essay on the front of Section C of the Wall Street Journal February 2 by Jonathan V. Last. senior writer at the Weekly Standard and author of a just-published book on the subject. (If the link from his web site to the Wall Street Journal piece doesn’t work, use your library card to retrieve the article via Proquest.)

United Nations 2005-2010 averages cited in the article put fertility below replacement in all 10 of the largest economies in the world measured by GDP except India.

Give credit where credit is due.  Bolstered by high fertility among immigrants, especially Hispanics, the U.S. at 2.07 was close to break-even during that stretch, with the French a close second at 1.97. But native populations of Japan (1.32), Germany (1.36) and Italy (1.38) are shrinking.

Especially in Japan, which is notoriously xenophobic, but also in the others, the one thing businesses can count on is that except for immigration there will be fewer customers to serve tomorrow than today. At current fertility, Last notes, by 2100 Japan’s population will be less than half what it is today.

This is familiar ground to anyone who has been paying attention to demography. It gives me an excuse to put up again one of my favorite charts.

The chart illustrates what demographers call the dependency ratio — the number of people of working age for each person beyond working age.  The population projections, from the United Nations, are based on median fertility; slightly lower fertility will make things worse, higher slightly better.

Each year there are fewer workers for each retiree. Looked at a year at a time, this is no big deal. But look out 20 or 40 years, and, as you see, it is a really big deal. And note that Japan already is where the U.S. will be in roughly 40 years. (Representations of the effects of longevity in five-year increments over a very long period (1950-2100) by country can be found here.)

Author Last starts his Wall Street Journal essay by noting that the Chinese have low fertility (1.54) enforced by draconian penalties. But American fertility is only slightly higher. In effect, he argues, we have our own version of China’s policy that we have chosen for ourselves.

Forget the debt ceiling. Forget the fiscal cliff, the sequestration cliff and the entitlement cliff. Those are all just symptoms. What America really faces is a demographic cliff: The root cause of most of our problems is our declining fertility rate.

The nation’s falling fertility rate underlies many of our most difficult problems. Once a country’s fertility rate falls consistently below replacement, its age profile begins to shift. You get more old people than young people. And eventually, as the bloated cohort of old people dies off, population begins to contract. This dual problem—a population that is disproportionately old and shrinking overall—has enormous economic, political and cultural consequences.

I love some of Last’s zingers. A sampling:

Last year, for the first time, the Japanese bought more adult diapers than diapers for babies . . .

Then there’s this angle:

The problem is that, while making babies is fun, raising them isn’t.

And so on. Familiar ground. I’ve written about it here and here. “Demography is destiny” is more than just cliché.