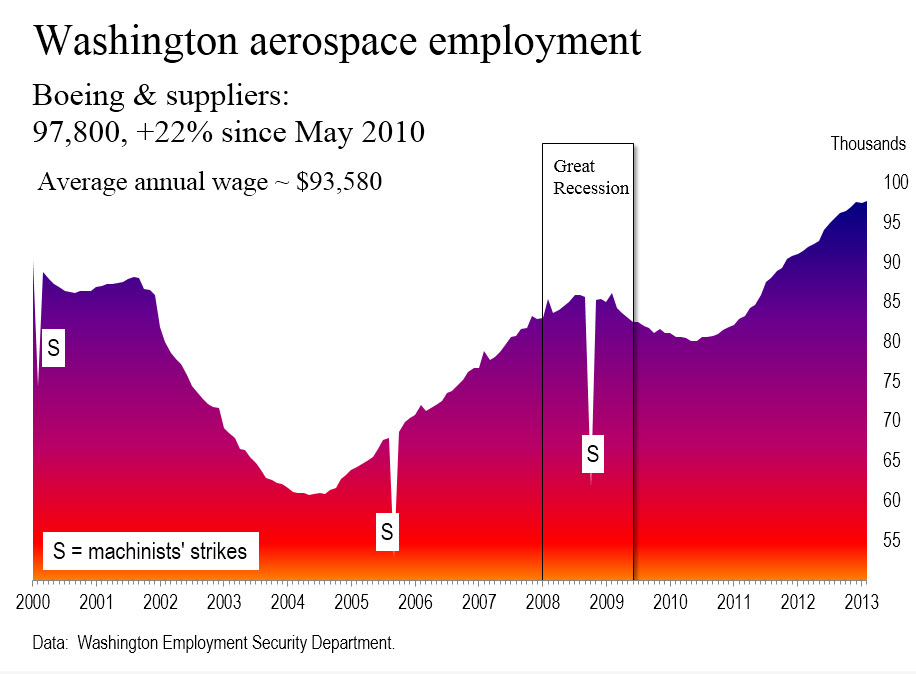 Aerospace employment in Washington has grown by an average of 520 a month in the 34 months since the cyclical low in late spring 2010 (top chart). Is another bust in the offing?

The volcano has begun to rumble. The Seattle Times reported March 22 that Boeing will lay off 800 machinists by the end of the year at Everett, where Boeing assembles its wide-body jet, including the new 787 Dreamliner, the 747 and the 767. By not filling vacancies, Boeing will reduce blue-collar head count by up to 2,300 by year end, apparently most or all at Everett.

But that’s not all. The Times reported March 26 that Boeing “may cut hundreds of white-collar jobs in the Puget Sound region this year in several restructuring and cost-cutting moves.” Nothing seems cast in stone yet. People who support planes no longer in production, including the 757 and older models of the 737, may be moved to Long Beach. Boeing told employees that the move will make room for support of future models.

The 9/11 terrorist attack was a disaster for Washington’s aerospace industry and economy. Employment at Boeing and suppliers crashed 31% (27,400) in less than three years to April 2004.

What’s different this time is that Boeing has record backlog, nearly 7½ years of production at 2012 rates (lower chart). (This duration will naturally come down as rates increase.) And the global economy on which Boeing depends is still growing — very slowly, to be sure, in the advanced economies, but smartly in emerging and developing economies. 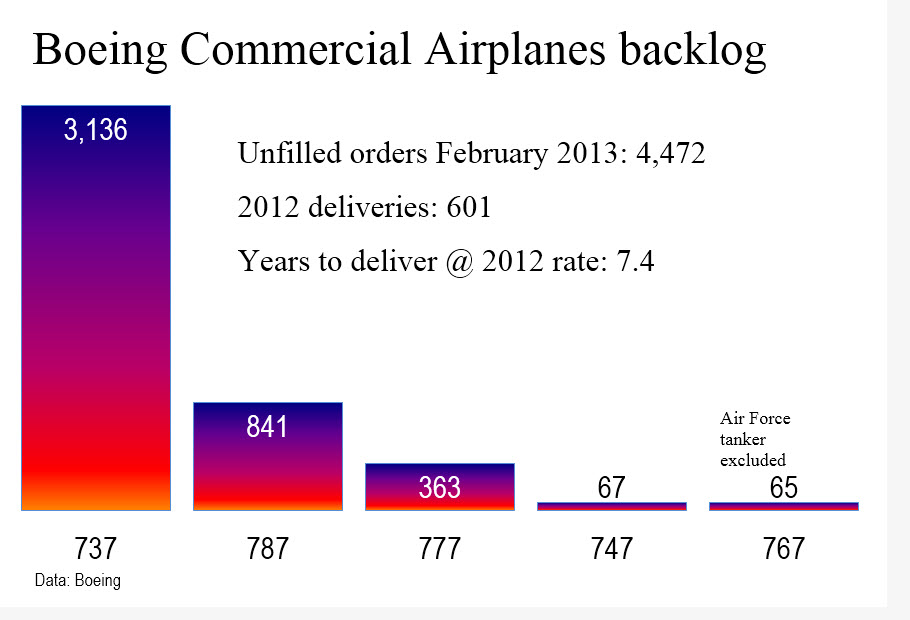 As long as standards of living continue to rise around the globe, travel will remain a growth industry, and air is the preferred form of travel. Once people achieve an income level that satisfies their basic needs for food, clothing, shelter and education for their children, wanderlust is likely to be the first use of disposable income.

I am worried about Boeing. The lithium-ion battery problem on the 787 is potentially — I emphasize potentially — an existential threat to the company. My worry is that a new battery material might require a redesign or reworking of the electrical system on the airplane, which depends much more on electrical (rather than hydraulic) systems than any modern jet. Wall Street obviously doesn’t share my concern; Boeing stock is flirting with the all-time high reached before the 2008 financial crash.

And my friend Jon Talton, the trenchant Seattle Times columnist, certainly has a point when he notes that Seattle is a mere branch town since Boeing moved its headquarters to Chicago a decade ago. Boeing has less of a stake in the well-being of the Washington State and Puget Sound economy than it did in the good old days.

I have no doubt that Boeing management would opt to build Dreamliners or 737s in China or Mexico if top brass thought a competitive product could be made in either of those locales. Boeing is not a charity or economic-development program. I spoke to Economic Alliance Snohomish County yesterday. I told members they are wise to have an aerospace task force and will have to fight like junkyard dogs for every job.

That said, there is a huge amount of inertia built into the resources, human and physical, that Boeing and its suppliers have assembled in the Puget Sound region. The only thing certain about the world we live in is that things will change. I would bet today that Boeing-related employment will remain relatively high and that jets will continue to be churned out of factories in Renton and Everett for many years to come.

Never say never. But with Boeing increasing production rates on most models and planning on a third production line at the 737 plant in Renton, I doubt we are looking at a double-digit decline in Washington aerospace employment any time soon.

Update: Bev Wyse, the head of Boeing’s busy 737 plant in Renton, is quoted in the Seattle Times June 14 as follows: “Employment in Puget Sound is going to remain robust — very strong — over the next few years, as we continue to increase rate on the 737 as well as the 787.” Here’s a link to the article by Dominic Gates.