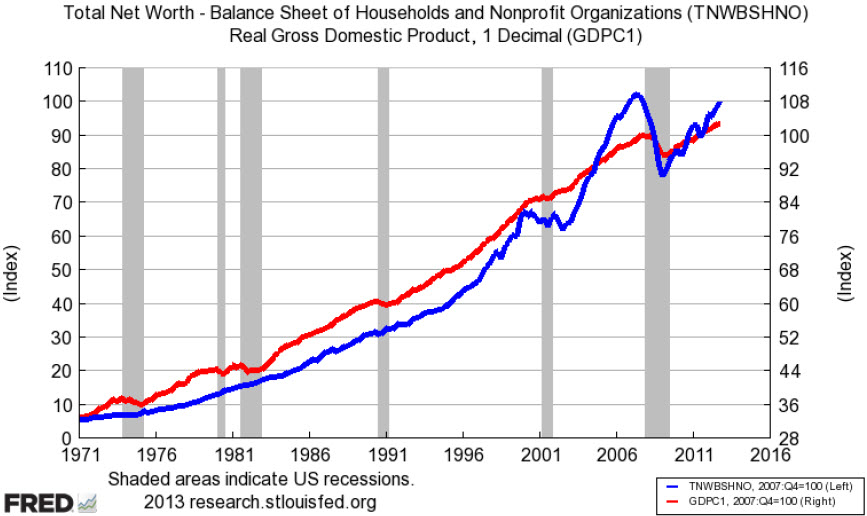 A correspondent who heard me last week on KUOW‘s Weekday program asks if there is research on “a correlation between the wealth lost in a downturn and the length of following recovery.” I told him the book to read is

I’ve got the book and have worked my way through part of it. It is not for the faint of heart. Reinhart and Rogoff argue convincingly that recoveries from financial crises take much longer than recoveries from garden-variety recessions.

A little fiddling at the excellent economic-research web site of the Federal Reserve Bank of St. Louis enabled the quick production of the nearby chart. The blue line is household net worth*, the red line real GDP. Both are indexed to 100 in Q4 2007, the start of the Great Recession.

The combination of the housing bust and the stock-market collapse knocked a record 22% off household net worth during the Great Recession. There is no question this swoon helps explain the weakness of the recovery.

My parents were teenagers during the Great Depression. The hard times they experienced left an imprint on them that never went away during the subsequent post-war prosperity. The one-two punch of Great Recession and subsequent Great Disappointment is having the same effect on today’s consumers.

Things seem rosy on Wall Street largely because the Federal Reserve’s repression of interest rates leaves savers few alternatives. The longer rates remain so low, the greater is the inclination to opt for equities paying dividends instead of bank deposits or CDs paying a few basis points.

The risk, of course, is that the stock market is a house of cards that will crash when the Fed starts raising rates. I am exposed to that risk. Most of my modest retirement savings are invested in the stock market. I don’t doubt that the next move in rates is up — rates have nowhere else to go. My hunch is that weak growth and high unemployment will keep the Fed on hold for some time yet. But I could be wrong about everything.

I told my corespondent that if he wants to feed his inner bear, he should read David Stockman’s intemperate rant at just about everyone and everything in finance in Sunday’s New York Times.

I’m no great fan of Paul Krugman, Nobel-prize winner in economics and liberal New York Times columnist. But I tend to agree with his trucculent comments on Stockman’s piece:

I thought there would be some kind of real argument, some presentation, however tendentious, of evidence. Instead it’s just a series of gee-whiz, context- and model-free numbers embedded in a rant — and not even an interesting rant. It’s cranky old man stuff, the kind of thing you get from people who read Investors Business Daily, listen to Rush Limbaugh, and maybe, if they’re unusually teched up, get investment advice from Zero Hedge.

* Data are from the Fed’s quarterly report on the balance sheets of households and non-profit organizations. The net worth of the latter don’t account for much in the broad scheme of things. The Fed’s data are the best we have on household net worth, which includes real estate and financial assets, offset by household debt.

One Response to “Wealth and recessions”