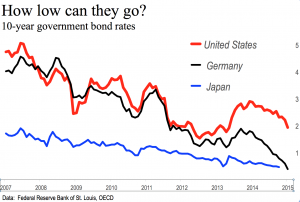 Why are interest rates so low?

The best answer, says Martin Wolf, principal economics columnist of the Financial Times, is that the globe’s advanced economies remain in a “managed depression.”

This is the phenomenon that former U.S. Treasury Secretary Lawrence Summers has in mind when he writes and speaks about “secular stagnation.” The contention, in brief, is that the globe is afflicted with an excess of savings and a shortage of demand.

Interest rates are really, really low. The chart shows rates for 10-year bonds of the U.S., Germany and Japan. Germany’s 30-year bond currently yields less than 1% per year, Japan’s only about 1.5%, that of the United States only a little more than 2.6%.

Wolf, former senior economist at the World Bank and widely considered one of the world’s most influential writers on economics, says that if you had told someone a decade ago that rates would be so low they would have concluded that you had gone mad. Only if demand, output and inflation were deeply depressed could rates be so low.

In fact, rates are low precisely because demand, output and inflation are low, notwithstanding the labors of central bankers around the world. That monetary stimulus — including so-called Quantitative Easing (QE) in the U.S. and the European Central Bank’s promise to hoover up billions of Euros worth of paper — has  produced such meager results indicates just how weak are the world’s advanced economies.

Ultra-low rates are not, says Wolf, a plot by central bankers. Rather than masters of the universe, Fed Chair Janet Yellen and her peers are as “apes on a treadmill” able to balance the demand and supply of capital only via ultra-low rates that have the potential to destabilize things down the road.

Critics harp that “money printing” by the Fed and other central banks will lead inevitably to runaway inflation and financial collapse. Wolf says they will continue to be disappointed. Low rates, he asserts, reflect “contractionary forces” in the global economy. Rates have to go up some day, but that day, says Wolf, is likely a long way off.