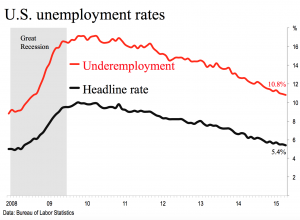 Friday’s jobs report showed the U.S. headline unemployment rate has fallen to 5.4%, the lowest since mid-2008. Good for us, but hold the applause. The underemployment rate, including those working part time involuntarily, remains relatively high (10.8%) for this stage of the recovery. It has been nearly six years since the Great Recession ended.

And both rates would be far higher had not so many dropped out of the labor force. Everyone who has been paying attention knows that labor-force participation — the fraction of the working-age population actually working or wanting to work (including seniors who still want jobs) — has been falling for years. Primarily because women were entering the work force, participation rose steadily from the 1960s, peaking at 67.3 point in early 2000. The downtrend accelerated during the Great Recession. Participation reached a cyclical low — 62.7% — last fall. April’s tally was 62.8%. 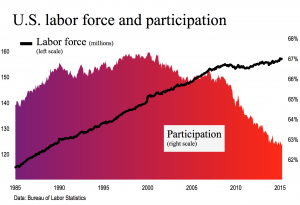 The number of Americans of working age not in the labor force, about 80 million before the Great Recession, has risen to 93.2 million, or roughly 29% of the U.S. population of 319 million.

Less well known is how participation by age group has changed over time. Put simply, young people are less inclined to work or look for a job than their parents. Grand-parents are more likely to work or seek employment than before.

The Bureau of Labor Statistics projects that by 2022, fewer than half of those in the age group 16-24 will be participating in the labor force — working or actively looking for work. Roughly two-thirds of that cohort was participating in 1992. Participation had fallen to about 55% by 2012. 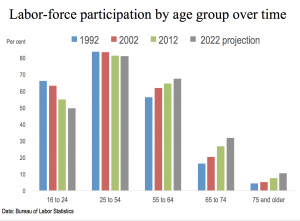 Unemployment rates vary widely by age — and help explain why younger people are considerably less enthusiastic about the world of work than their elders. In April, the official unemployment rate for those over the age of 54 was a mere 4.0%. For those aged 16 to 19, the rate was a discouraging 17.1%.

Seniors work for a variety of reasons. Some wish simply to escape boredom. But higher participation by seniors is no doubt an unintended consequence of the Federal Reserve’s unprecedented repression of interest rates. Seniors are working in part because they can’t earn a decent risk-free return on their retirement kitties. Sure, they can go into the stock market, but how did that work out in 2008? And they can buy bonds rather than keep their money in banks. But bond prices will go down when interest rates normalize.

Even though unemployment is lower, workers’ wages are stuck at a growth rate of only about 2% a year. The Wall Street Journal’s verdict on Friday’s jobs report seems right:

The shrunken labor force, along with weak earnings, serve as a reminder that the economy has yet to achieve the muscular growth of many previous expansions that would be needed to raise living standards across the American middle class.