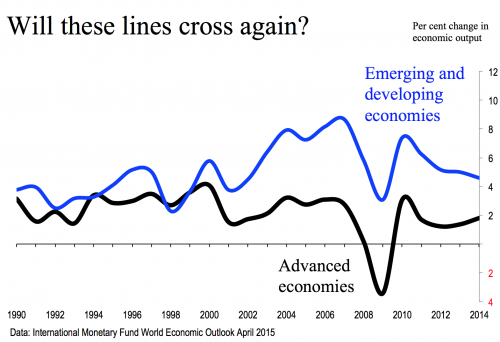 If you haven’t read it, get to your library (or use your library card) to read Ruchir Sharma’s op-ed in the Wall Street Journal August 17 (Page A 11). He argues that with advanced economies stuck in slow-growth mode, the globe is “one shock away from recession” and that the shock is likely to come from debt-laden China, where growth is fading despite massive government intervention in the economy.

Sharma, head of emerging markets and global macro at Morgan Stanley Investment Management, argues that China’s recent economic growth has been driven by massive and unsustainable stimulus. He writes that

No emerging nation in recorded history has ever tacked on debt at such a furious pace as China has since 2008, and a rapid increase in debt is the single most reliable predictor of economic slowdowns and financial crisis.

Sharma writes that Chinese leaders are unwilling to accept that recessions are perfectly normal even for economic superpowers, which China has most certainly become.

Beijing has little tolerance for business cycles and is now reviving efforts to stimulate sectors that it had otherwise wanted to see fade in importance, from property to infrastructure to exports. Given the over-investment in these areas and the cloud of debt that still hangs over the Chinese economy, these efforts are unlikely to lead to a sustained upturn.

And here’s a wrinkle I haven’t seen written about elsewhere much, and I read a lot. Emerging economies have been hit much harder by China’s slower growth (down to 7% after 20 years of double-digit advances). As a result, says Sharma, for the first time in nearly two decades, emerging and developing economies likely are growing more slowly than rich countries.

Sharma notes that the U.S. economy is among the least affected by China’s slowdown. It is resilient and growing, but unlikely to grow at a fast enough pace to offset China’s slower pace. Europe and Japan are stable, but with too little growth to make much of a difference globally.

Sharma’s thesis was reinforced for me by a Page 1 article in today’s Financial Times (subscription required after a few articles a month). The newspaper reported that over roughly the past year, nearly $1 trillion (a thousand billion) of capital has gushed out of the largest emerging-market economies, roughly double what was pulled out over a comparable period in the financial crisis of 2008-2009. The FT’s take:

The sustained exodus reinforces concerns that emerging market economies, suffering slowing growth and weakening currencies, are relinquishing their longstanding role as engines for global growth to become a drag on demand.

And the outflows have much further to go, says Maaren-Jan Bakkum, senior emerging-market strategist for NN Investment Partners, the Dutch money manager which massaged official figures and made its own estimates to come up with the outflow figure of nearly $1 trillion for the FT report.

Emerging economies have outgrown advanced economies for so long most of us can’t remember when the opposite was true. Data from the International Monetary Fund (chart) show the lines last crossed in 1998. Going back to the future would have profound implications for all of us. Stay tuned.