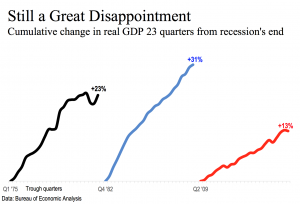 June marks the end of the sixth year since the Great Recession passed into history. At 18 months, it was the lengthiest recession since World War II, surpassing the 16 months of the other notably long-lived  post-war recessions, ended in March 1975 and November 1982.

For duation, of course, the Great Depression has no challenger in modern times. It lasted 43 months from April 1929 to March 1933. In the history of U.S. cycles going back to 1854, only the recession that commenced in October 1873 lasted longer (65 months). The arbiter of such matters is the Business Cycle Dating Committee of the National Bureau of Economic Research; click here for cycle dates.

The Great Recession was also the most severe post-World War II pullback. At their lowest points during the Great Recession, employment had fallen 6.3% and output 5.1%.  These data are courtesy of the Federal Reserve Bank of Minneapolis; here’s the link to its data. 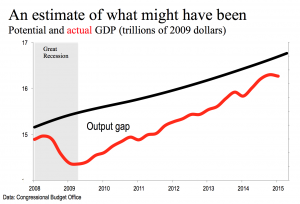 Had the U.S. economy grown as fast in the first six years of the Obama administration as in the like period of the Reagan administration, output of goods and services would be running at an annual rate of about $20.5 trillion rather than today’s $17.7 trillion. Had the U.S. economy grown even at just the post-war average, millions more people would have jobs today. Government at all levels would have far more cash.

The Congressional Budget Office estimates the “output gap” — the difference between actual GDP and what could be accomplished with relatively optimum use of both capital and labor. CBO put the difference at about $266 billion at the beginning of the Great Recession.

At the Great Recession’s nadir, in the first half of 2009, the gap exceeded $1 trillion on an annual basis, equal to roughly 8% of actual GDP. As the second chart shows, the gap has since narrowed. But it remains more than $400 billion, well above its pre-recession level.

Why has growth been so slow? Demographics is no doubt a major factor. We are getting older, and fewer and fewer of us are participating in the labor force (i.e., work for a living).

Globalization and the related erosion of U.S. manufacturing employment (blue collar, relatively high paid) share a part of the blame. Advances in technology have created entirely new industries — think cellular telephony and social media — but they have also wiped out millions of jobs.

Under the headline “The New Bookkeeper is a Robot,” the Wall Street Journal noted recently (May 5) that automation (mainly in the form of software) “is threatening to replace swaths of white-collar workers, much as mechanical robots have displaced blue-collar workers on assembly lines.”

Once-common clerical jobs — accounts-payable and accounts-receivable clerks, inventory-control managers — are being swallowed up by software. Citing research by the consulting firm the Hackett Group, the Journal reported that the median number of employees in the finance departments of large companies has declined 40% in a decade. The same is true in information technology and human resources. Large companies get by with 44% fewer information-technology employees than a decade ago and 20% fewer human-resource managers.

Tyler Cowen, professor of economics at George Mason University, puts forth the idea that there is something even more basic going on. In the New York Times, he writes that

It is hard to avoid the feeling that our current economic problems are more than just a cyclical downturn…[T]he radical and sudden changes of the financial crisis [may have been] early indicators of deep fragility and dysfunctionality…[W]e may be watching the slow unfolding of a hand that, in its fundamentals, has already been dealt.

Cowen observes that major manufacturers — Ford, General Motors, Chrysler, Caterpillar, Navistar — pay new employees as little as half their older ones. Wages for the typical graduate of a four year college, he says, has dropped 7% since 2000. As we have noted, labor-force participation by the young has been declining steadily over the past few years.

Cowen worries that “our economy is evolving into one that will offer far less favorable long-run wage prospects.” Sounds like Cowen has been drinking at the trough of former Treasury Secretary Larry Summers, who has been worrying in print about “secular stagnation.”

Such worries may be well-founded says Noah Smith, an assistant professor of finance at Stony Brook University and author of the blog Noahpinion, in part because “there are certainly plenty of things we don’t understand about the macroeconomy.” He adds: “Empires decline, golden ages do end.”

But that shouldn’t prevent us, argues Smith, from experimenting with economic policies designed to restore robust economic growth.

If workers have suffered from a long spell of unemployment, give them some make-work jobs to get them back in shape. If you have secular stagnation, have the Federal Reserve raise its long-term inflation target. And so on. … If creeping doom is inevitable, then so be it, but there’s no reason not to try our best to avert it.