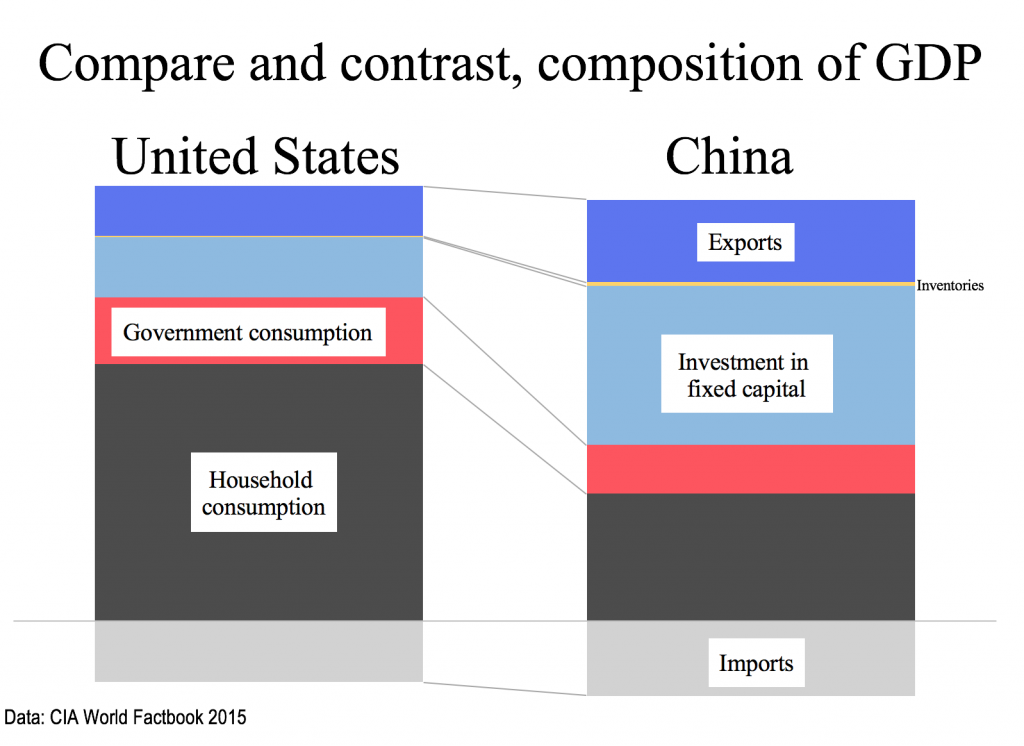 One of the main problems with China’s economy is that it is geared too heavily to exports and infrastructure spending, too little to domestic consumption.

You can see the contrast with the U.S. in the chart. American consumers are in the driver’s seat in the U.S. Household consumption in 2014 accounted for 68.7% of gross domestic product (GDP). The comparable figure for China: 36.8%. The data are from the current issue of the CIA Factbook.

And the contrast is especially dramatic when it comes to investment in fixed capital — things like housing, roads, bridges, airports, high-speed rail (in China’s case) and the like. China has become not only the world’s factory, but also the epicenter of an unprecedented construction boom. Capital expenditures accounted for 46.0% of China’s 2014 GDP, not quite three times the 15.9% level in the United States.

And exports are almost twice as important to the Chinese economy than the U.S., accounting for 23.9% of Chinese GDP vs. 13.4% for the U.S.

None of this is new. Chinese leaders have known for years that they need a better balance, especially between capital investment and household consumption. Anyone who has been paying attention knows that the high level of investment, while supporting employment, has resulted in the mis-allocation of capital into stuff (such as ghost cities) that makes no economic sense.

Martin Wolf of the Financial Times, my guidepost on China as on so much else, writes that China’s leadership currently is juggling three headaches: How to clean up past financial excesses without setting off a financial crisis; reshaping the economy to increase domestic consumption and reduce dependence on capital spending, and keeping all these balls in the air while sustaining overall demand for goods and services.

Getting all this done is a tall order, and Wolf is not particularly optimistic. His take:

Recent events matter because they suggest the Chinese authorities have not yet worked out a way of pulling this triple combination off. Worse, the expedients they have tried over the past seven years have made the predicament even worse. Maybe, [stock-market inventors have] grasped how difficult this is going to be and so how destabilising some of the options the Chinese might choose actually are. These include devaluation, ultra-low interest rates and even quantitative easing. If this is the case, the market turmoil might not be foolish. The global savings glut can get worse. That would affect everybody.