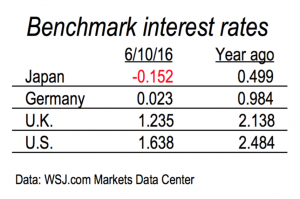 How low can interest rates go? I don’t know. Rates hit new all-time lows in parts of the world last week. The table nearby lists yields last week and a year ago on the 10-year government bonds of four of the most important issuers.

The Fitch bond-rating service has been quoted recently as reckoning that more than $10 trillion of various government bonds are trading at prices that produce negative yields. (Bond prices and yields move inversely.) Not quite right, reported the Wall Street Journal, if you adjust for inflation. The yield on Japan’s 10-year paper is nominally below zero, but if you adjust for the fact that prices are falling in Japan, the yield is in the black.

In a world of interest rates near or below zero, it sometimes feels like we’ve fallen through the looking glass. Consider:

• The Swiss National Bank last week (June 8) auctioned 13-year bonds with a zero coupon. That’s right, the SNB promises that in 2029, buyers will get back 100 cents on the dollar (or rather the equivalent in Swiss francs). But this is Switzerland. Demand for this haven asset was so strong that the bonds were sold at a premium, meaning that buyers will get back less than they put in. Sidelight: The Financial Times reports that Swiss notes and bonds out to maturities of 22 years are all trading at prices that produce negative returns.

• Germany’s second-largest bank, Commerzbank, is reported by the Financial Times to be considering storing bank notes in vaults rather than keeping excess cash on deposit with the European Central Bank (ECB),  which charges 75 basis points (0.75%) for the privilege. It is costly to store cash, and will become more so once the European Central Bank stops printing 500-euro notes. But bank notes don’t lose value. Reserves held at the ECB do.

• Japan’s largest bank, Bank of Tokyo Mitsubishi UFJ, confirmed that it is considering dropping out of the exclusive club of banks that serve as primary dealers for Japanese government bonds. Japan’s central bank is charging member banks 10 basis points (0.1%) on certain reserves. Bank of Tokyo’s move is like giving up your membership in an exclusive country club.

• Some regional authorities in Switzerland have asked property owners to delay paying their property taxes so as not to be flooded with cash that has to go into banks. Cash is not trash these days if you can put bank notes in a vault. But it is if you have to put cash into bank deposits.

Where all this ends no one knows. But the experts increasingly warn that NIRP (negative interest rate policy) and N-ZIRP (near-zero interst rate policy) are distorting markets and affecting the prices of all manner of things, and not in a good way. Bond king Bill Gross warned last week that the mass of negative-yielding government bonds amounts to a “supernova that will explode one day.”

At Gross’s former employer, Pimco, the globe’s largest fixed income manager, a senior executive said recently that negative-yielding securities are to be avoided. Pimco’s customers pay it to look after their money. As Katie Martin of the Financial Times put it recently, Pimco in good conscience cannot sign up for investments that return less than what goes in. That’s not the way the game is supposed to be played.

On the decline in rates, the Journal quotes Richard Gilhooly, head of interest-rate strategy at CIBC World Markets Corp, as follows:

It has been contagious and relentless. It is like a vacuum sucking bonds into a black hole.

Some analysts interviewed by the Journal said they would not rule out a yield of 1% on the benchmark U.S. 10-year note.

Because bond prices and yields move inversely, things will work out very badly for buyers of government bonds if interest rates go up. Bond prices would fall — a little at the short end of the maturity continuum, a lot at the long end. A 1% increase in interest rates would cost the holder of a 10-year U.S. Treasury note about 9% in the value of the bond. The value of a 30-year bond would decline by twice as much under the same circumstances.

Say this much with confidence: We have not seen this movie before. We don’t know how it ends.