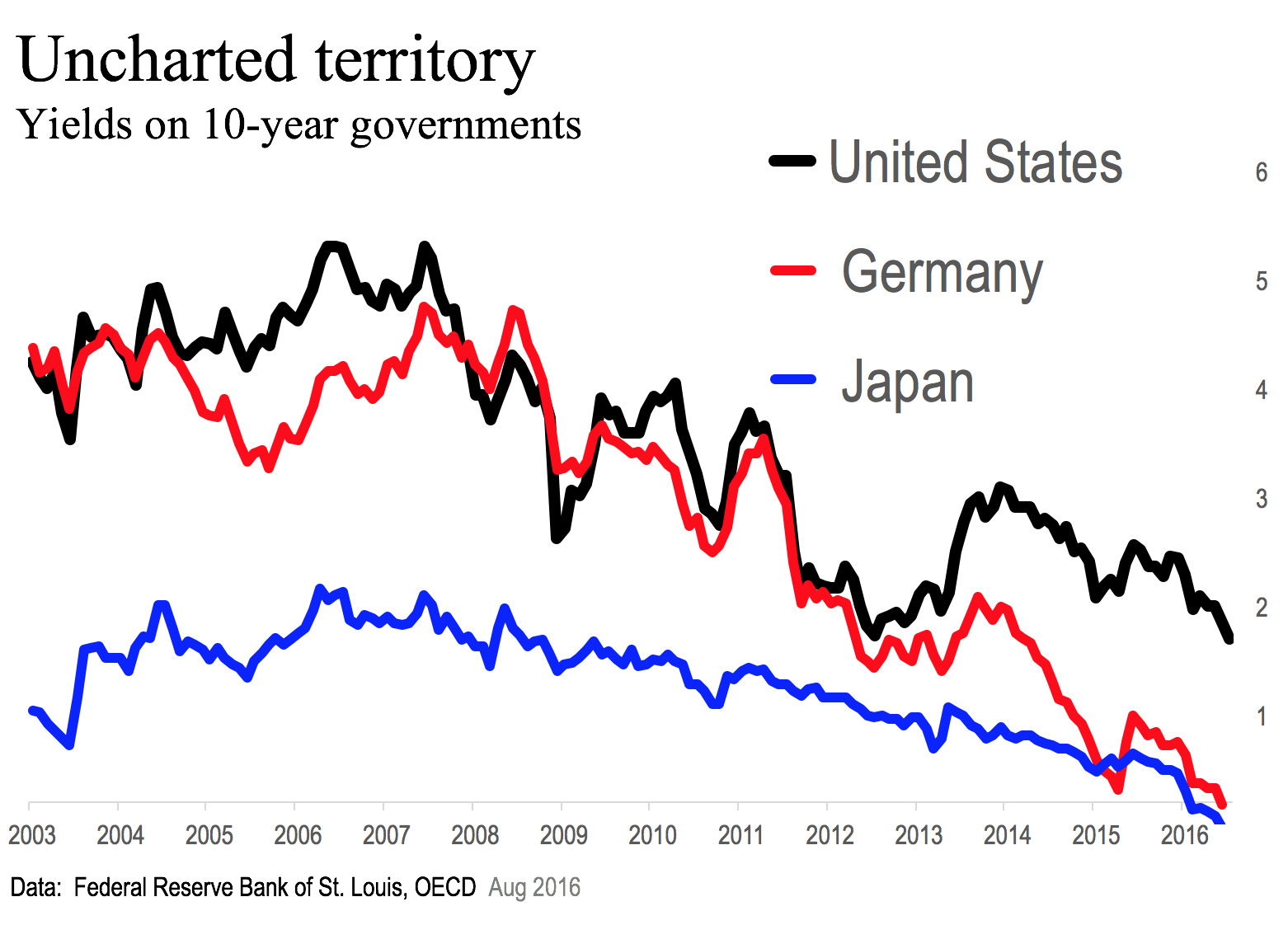 For a quick economic update for members of Bellevue Rotary recently, I updated several slides I usually include as a part of my talks and added a new one or two. You can download all of them as a PDF file here. 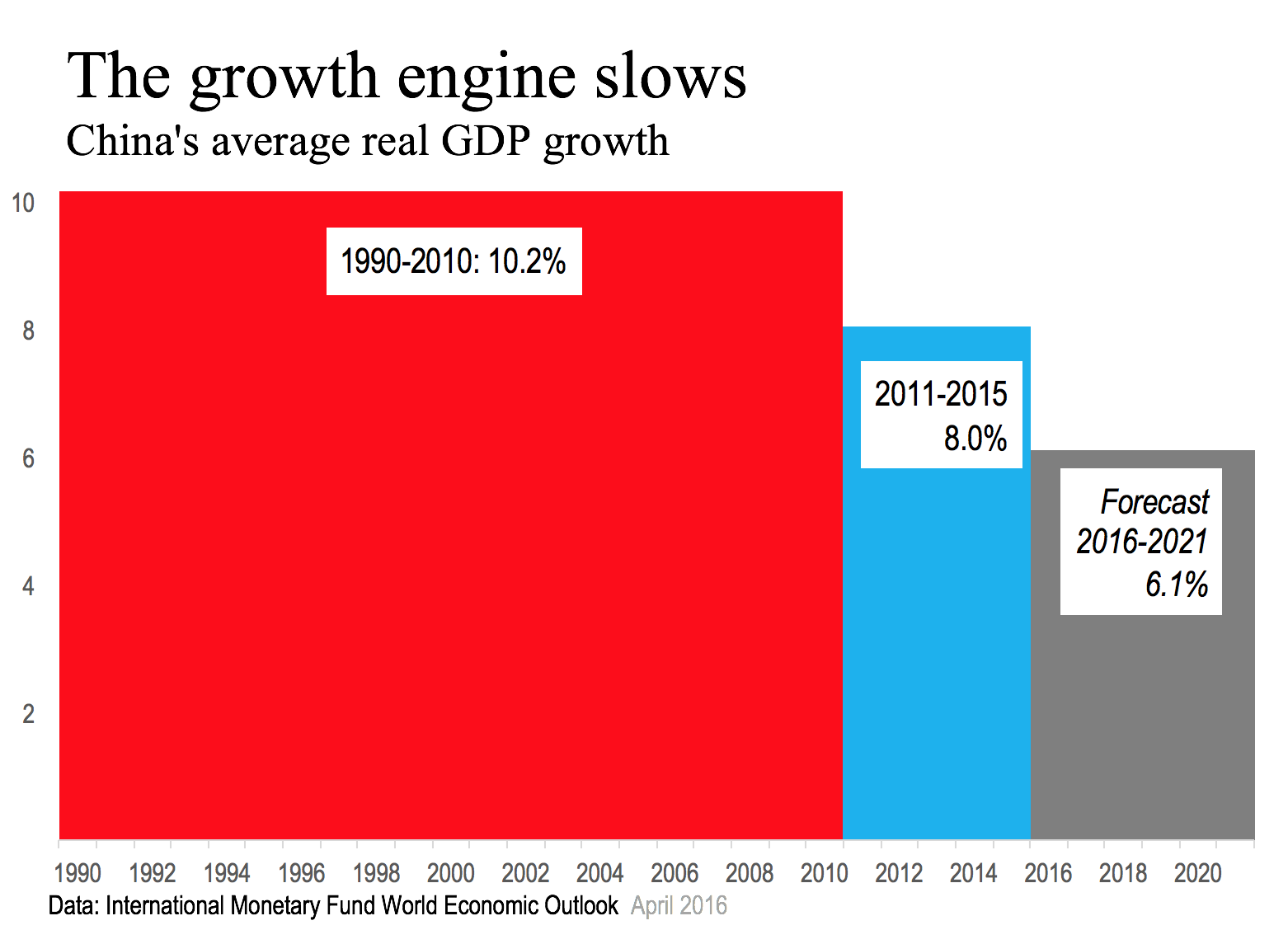 Slow-growth world? Neil Irwin of the New York Times neatly summed up what’s going on globally in an article that started on Page 1 of the August 7, 2016, edition:

Economic growth in advanced nations has been weaker for longer than it has been in the lifetime of most people on earth.

The most obvious change globally is the dramatic slowdown in China. As the chart shows, China grew at a real rate of more than 10% in the roughly two decades to 2010, a rate that doubles the size of the economy in about seven years. During that stretch, the size of China’s economy increased more than six-fold. More people were lifted out of poverty at a faster rate than at any time in human history.

But in four years through last year, China’s economy expanded at an annual rate of only about 8%. The International Monetary Fund forecasts a growth rate of only a little more than 6% out beyond the end of this decade, more than 40% slower than during the roughly two decades through 2010.

Beyond China, Harvard economist N. Gregory Mankiw writes in the New York Times that there are at least five plausible theories why U.S. real GDP growth has fallen from its historic norm of about 2% a year to less than a quarter of that (0.44%) in the past decade.

To paraphrase: 1. Statistics aren’t keeping up with the real world, failing to capture quality improvements and new products. Silicon Valley favors this theory. 2. The recovery is slow because the Great Recession (January 2008-June 2009) was so severe. 3. The economy is in “secular stagnation” related to the aging of the population. Former Treasury secretary Lawrence Summers coined the phrase and favors this theory. 4. The pace of innovation has slowed. Robert J. Gordon of Northwestern University favors this explanation and has written a book about it, The Rise and Fall of Economic Growth: The U.S. Standard of Living Since the Civil War. 5. Policy mistakes. President Obama’s response to the financial crisis — Keynesian stimulus, followed by tax increases, was the wrong formula. Skeptics think the President should have focused on policies that encourage investment and job creation rather than remaking roughly two-fifths of the U.S. economy, health care and banking. 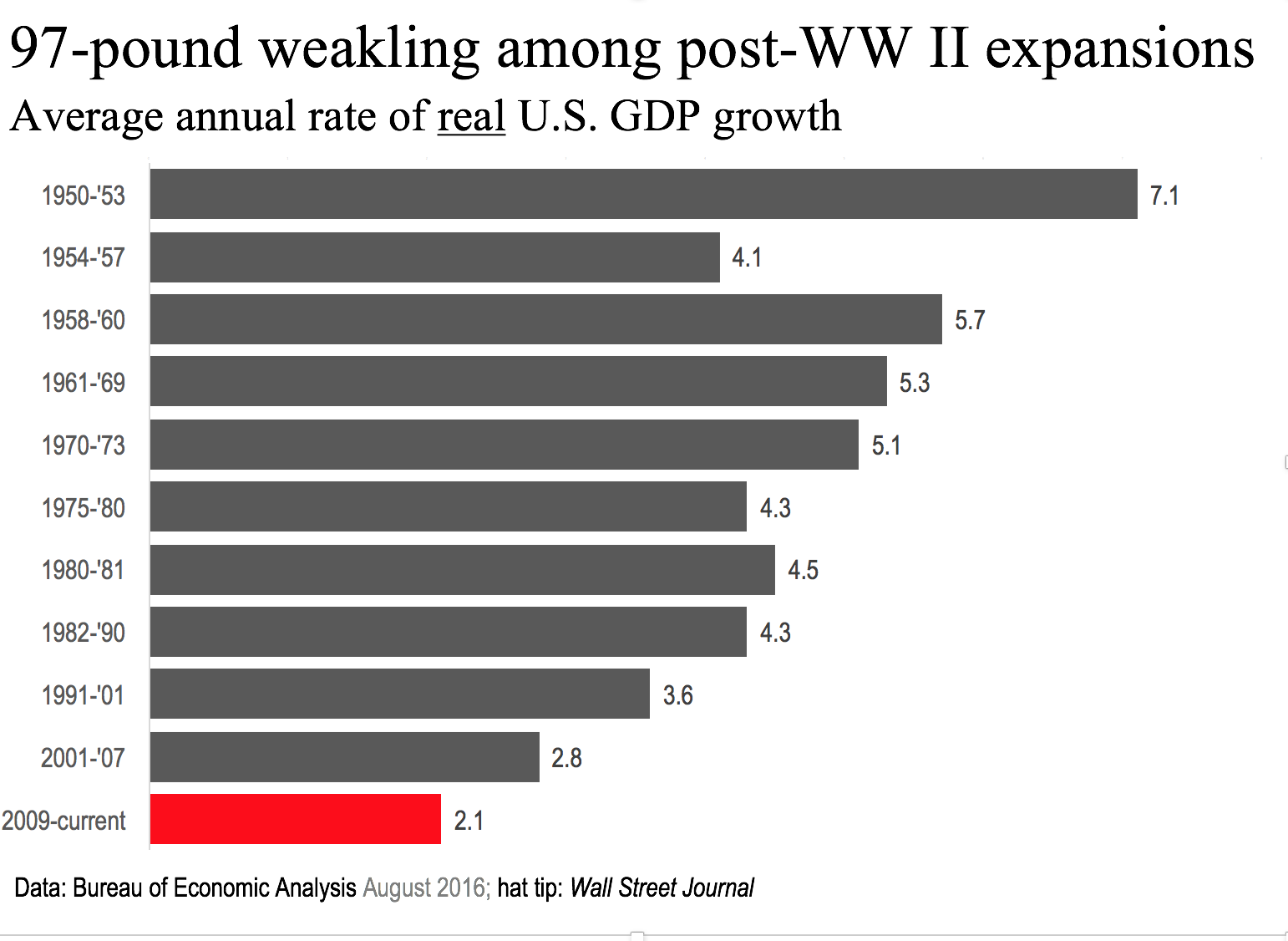 Two charts help make the point. The first shows that real U.S. economic growth has averaged just 2.1% per year in the seven years since the Great Recession ended in June 2009. As the chart’s headline says, this recovery is the “97-lb. weakling” among post-war recoveries.

The second shows how the U.S. economy progressed following the three lengthiest post-World War II recessions. The Great Recession lasted 18 months, according to the business-cycle dating committee of the National Bureau of Economic Research, the official arbiter of such matters. 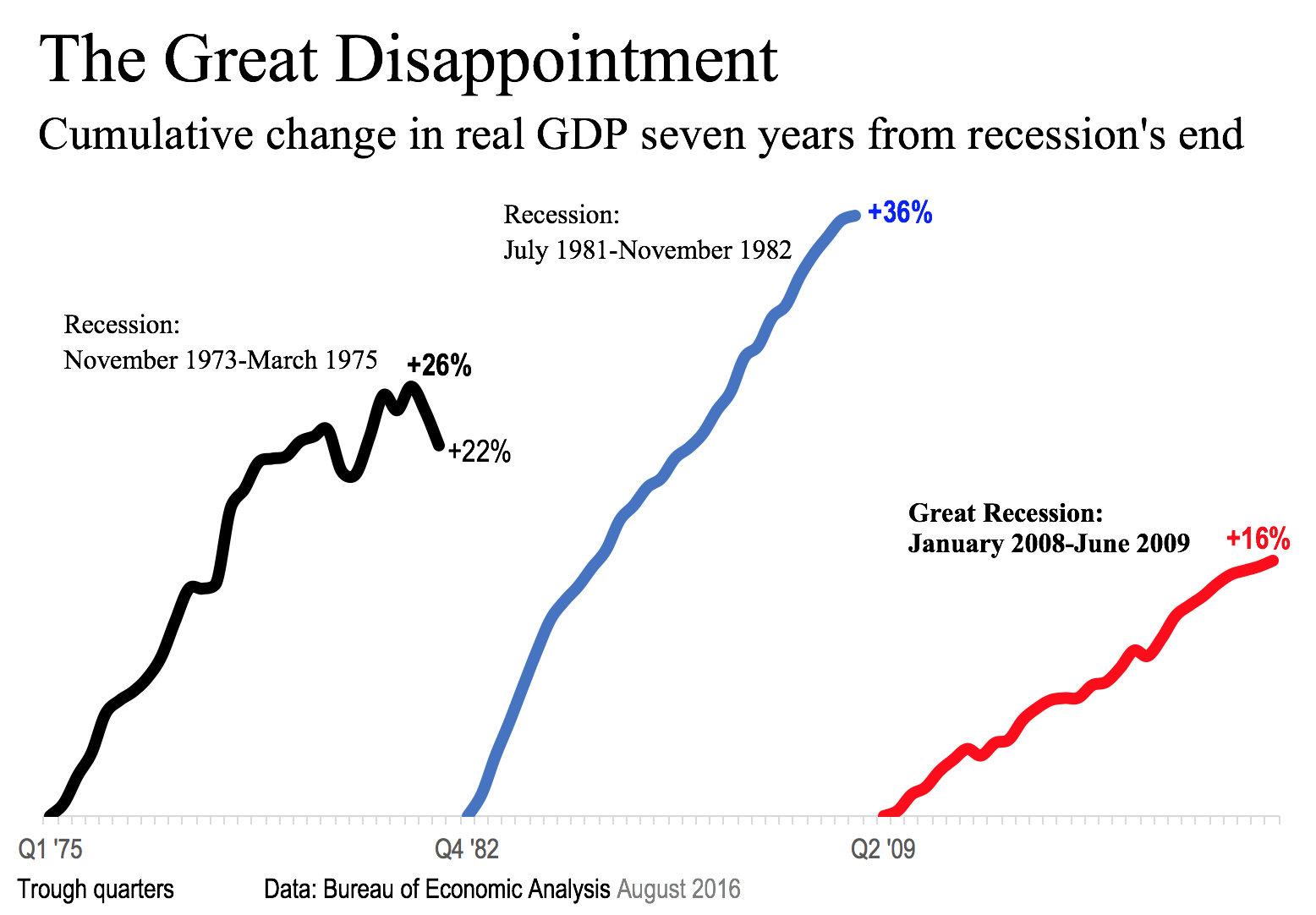 The two most lengthy recessions prior to the Great Recession ended in March 1975 and November 1982. As the “Great Disappointment” chart shows, the recoveries were much more vigorous than from the Great Recession. July 2016 marked the beginning of the eighth year of recovery from the Great Recession. Yet as measured by real Gross Domestic Product, our most comprehensive economic indicator, the U.S. economy today is only about 16% larger than it was at the trough in June 2009.

By contrast, the recovery from the 1973-75 recession had reached 26% well before the comparable date and, as the chart shows, the next downturn had begun. Seven years after the trough of the 1981-82 recession, the U.S. economy was a full 36% larger than it was at the trough. Like Barack Obama, Ronald Reagan inherited an economy in recession. Things turned out quite a bit differently on his watch.

Despite the most tepid recovery of the post-World War II era, the economy of the United States is doing better than economies of its peers. Only Canada among G-7 advanced economies has grown faster than the U.S. the past decade, and it is now being laid low by weak oil prices. Germany and the United Kingdom have come closest to matching the U.S. growth rate. Japan and France are serious laggards. Italy’s economy is actually about 7% smaller than it was a decade ago. 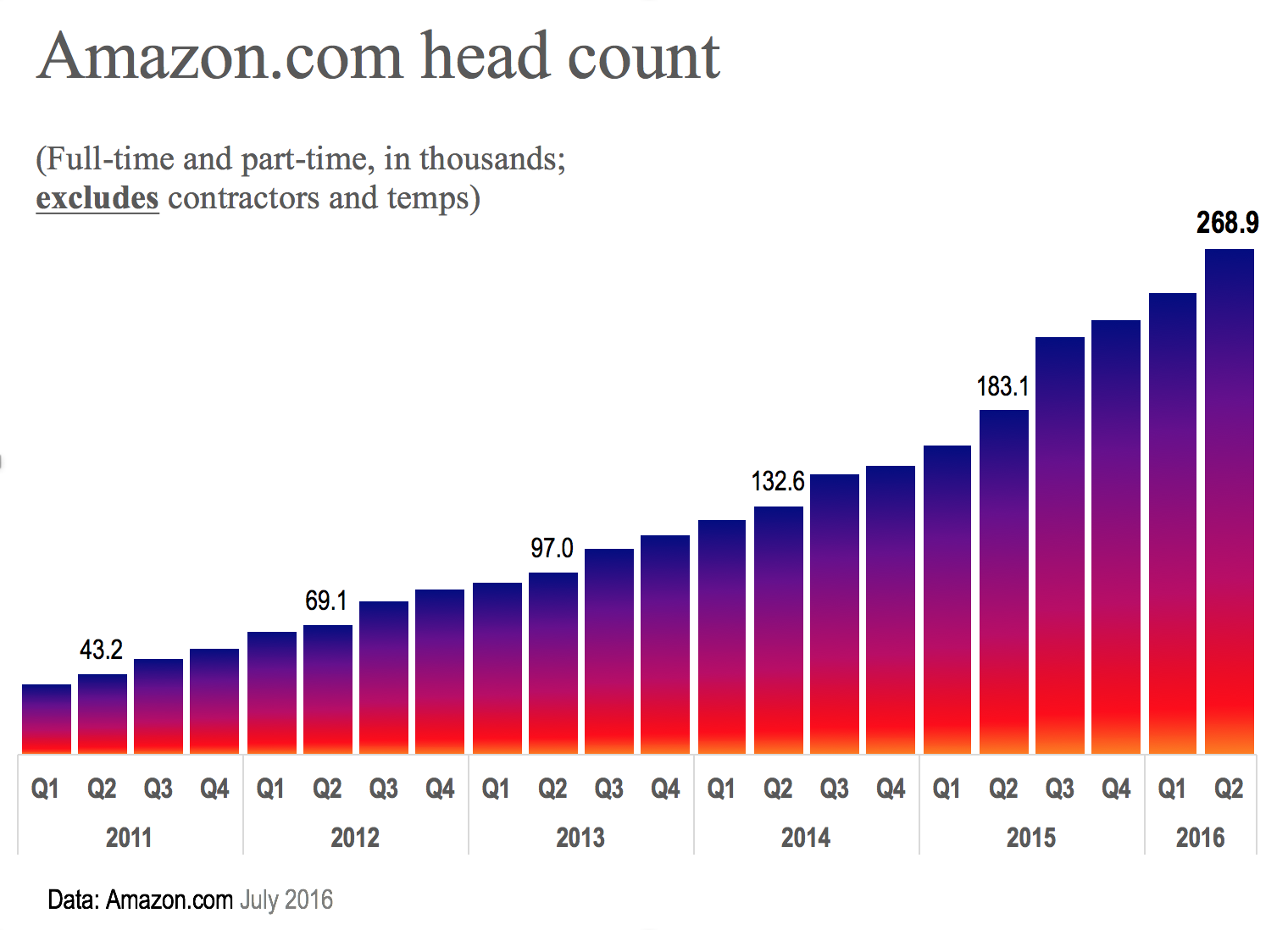 The explosive growth of Seattle-based Amazon.com is the primary engine.

An Amazon web site that is hard to find — do a Google search on Amazon U.S. economic impact — reports that Amazon had about 30,000 employees in Washington State as of March 2016. A year ago the Seattle Times reported that Amazon is on track to occupy about 10 million square feet of office space in downtown Seattle, enough to accommodate roughly 50,000 employees. 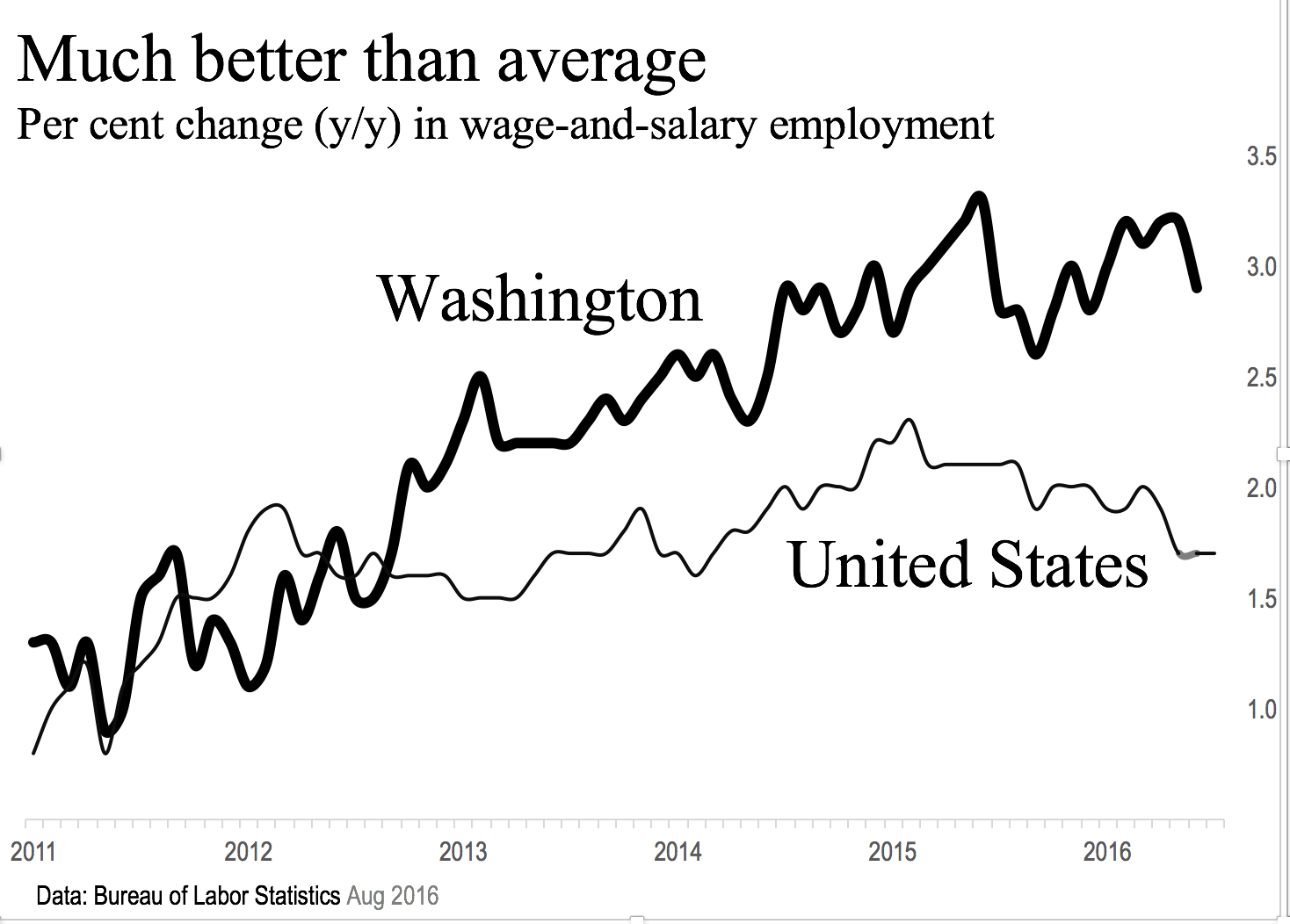 Amazon’s rapid growth helps explain why Washington payroll employment has grown faster than average, especially over the past three years.

But credit for the current boom can be spread around. The Seattle metropolitan area has become a relief valve for the Silicon Valley, with lower costs for talent, housing, office space and mobility.

As well, Seattle has become ground zero for software for managing cloud computing and for the commercial development of space, thanks to the interests of Jeff Bezos and Paul Allen in the subject.

Concluding my recent talk, I told my listeners to be optimistic but wary. The U.S. economic recovery is now in its eighth year. Business cycles have not been repealed. And, as usual, beware the Black Swan, the upset that by definition cannot be forecast.