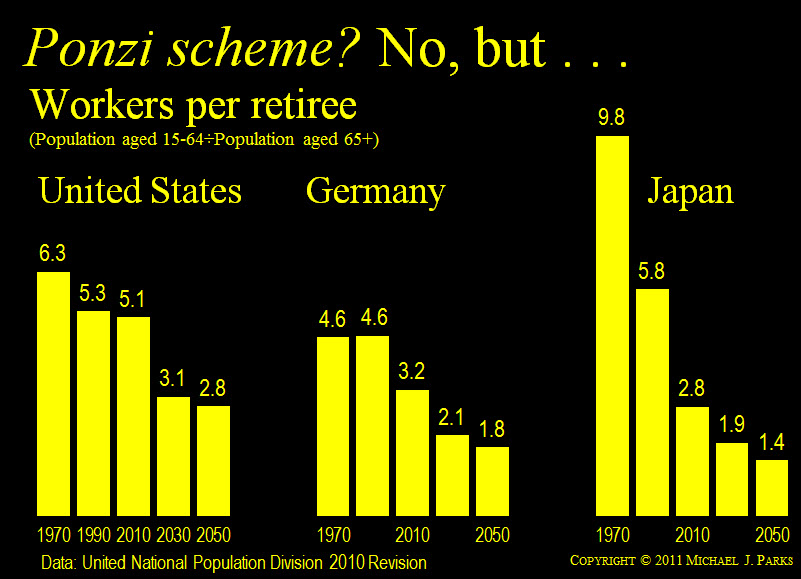 Is Social Security a Ponzi scheme, as Texas Gov. and GOP presidential candidate Rick Perry labeled it during the GOP candidates’ debate Sept. 7?

The answer is “No.” Charles Ponzi gave money collected from early suckers attracted by phony promises of high returns to new suckers after taking a cut. He was a fraud. Ponzi ran a form of pyramid scheme that requires unsustainable increases in the number of suckers. Sure, there is a grain of truth to Perry’s charge, but only a grain.

Social Security is a pay-as-you-go income-transfer program, widely misunderstood, underwritten by the largest and richest economy on the globe.

Benefits paid to today’s retirees come from taxes paid by today’s workers. Its essential purpose was to keep the elderly out of penury. It was not designed as or intended to be a pension plan.

President Roosevelt’s signing statement (Aug. 14, 1935) said the law was intended to “give some measure of protection to the average citizen and to his family against the loss of a job [the act provided the foundation for state unemployment insurance] and against poverty-ridden old age.”

Yes, I know that income has exceeded outgo for several years, or did until the recent unpleasantness (the Lesser Depression), and that the surplus went into a trust fund. In fact, the surplus was exchanged for promises to pay in the future (also known as government bonds), and was spent. The bonds will have to be redeemed by future taxpayers.

The real problem with Social Security is that the ratio taxpayers to beneficiaries is gradually declining. Each year there are slightly fewer people of working age for each person of retirement age.

Look at this year-to-year, and it doesn’t seem like such a big deal. Viewed through a wide-angle lens – which is what I try to do in the chart – and it is clear that this is a really big deal. “Demography is destiny” is more than a cliché. For the globe’s three richest economies, I chart recently-updated United Nations Population Division projections based on medium fertility. Higher fertility would ease the problem somewhat (more workers), lower fertility would make it worse.

The problem of what demographers call rising old-age dependency ratios is common to all rich countries. Today’s unemployment rates (high) and labor-force participation rates (in the U.S., a 30-year low) aggravate the problem.

Japan, with its low fertility and disdain for immigrants, has the highest old-age dependency ratio of any rich country. There are fewer than three people of working age (15-64) in Japan today for every person beyond the generally accepted retirement-age line (65). Forty years from now, Japan will have about two in retirement age for every three in the working-age group. Yes, the U.S. has issues, but note that the dependency ratio in Japan today already has reached a level the United States won’t reach for 40 years.

Unless benefits are to be radically reduced, not likely because seniors outvote those of working age, both the wage base and the tax rate must go up, again, gradually, over a period of years. The over-generous cost-of-living adjustment, which had been too favorable to beneficiaries over the years (though there were no raises in 2010 or 2011), needs to be overhauled. And we need to talk about means-testing benefits. Once he has recovered his payroll contributions with nominal interest, Warren Buffett should get a smaller check than I, or perhaps none at all.

The simple fact is that the adjustments will have to be made. I think David A. Levy and Srinivas Thiruvadanthai of the Jerome Levy Forecasting Center were spot on in a 2010 monograph entitled “Uncle Sam Won’t Go Broke” when they wrote:

If 20 years from now the economy cannot support the standard of living presently guaranteed to retirees while maintaining the standard of living active workers expect, then something will have to give, and none of the alternatives will be attractive. The government will either have to reduce retiree benefits, significantly raise taxes on workers to pay for retiree benefits, or meet the obligations to retirees without raising those taxes, resulting in inflation that would lower workers’ real wages.

Herbert Stein, chairman of the President’s Council of Economic Advisers in the Nixon and Ford administrations, famously espoused what has come to be known as Stein’s Law: “If something cannot go on forever, it will stop.” I’m not sure he had rich countries’ social-insurance plans in mind, but Stein’s Law surely applies.

Getting to where we need to go won’t be easy. Leaders of rich countries, writes Max Hasting, a contributing editor of the Financial Times, face the unenviable task of reconciling  electorates “to accepting less of everything than they have had in the past.” That doesn’t make much of a campaign slogan. Today’s leaders probably figure Jack Nicholson had it right in the movie A Few Good Men: “You can’t handle the truth.” Who can blame them?