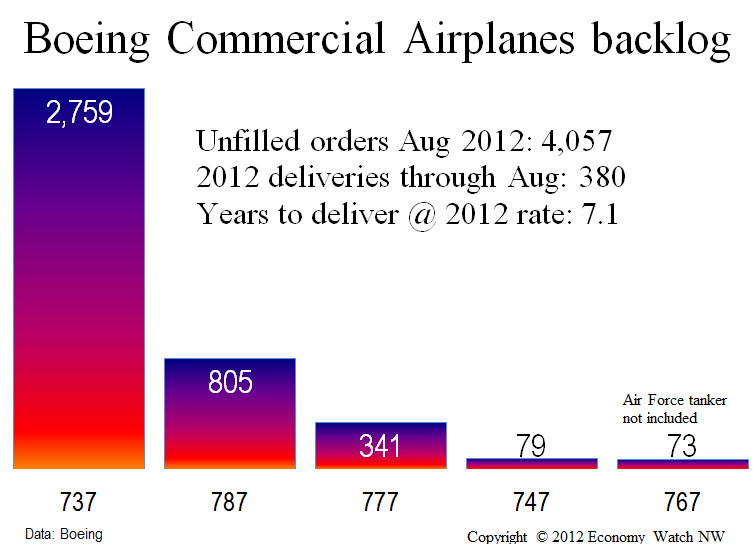 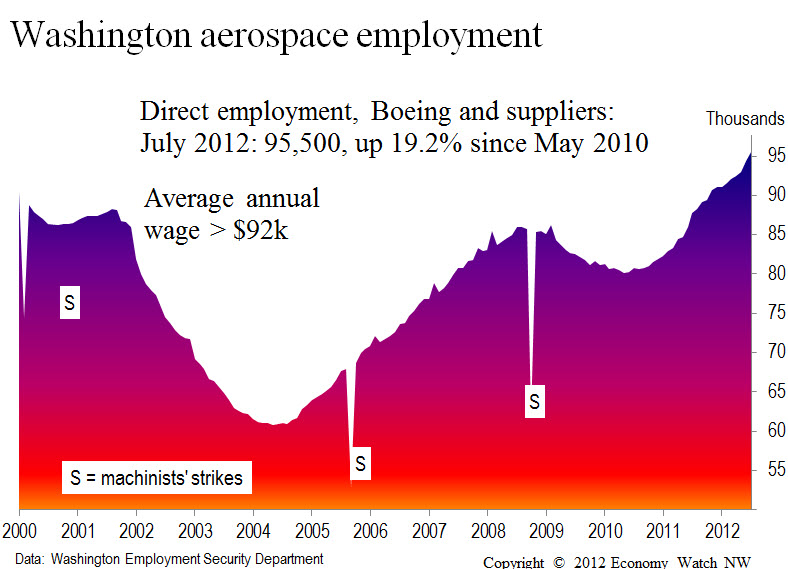 A couple of things worth noting: Even after adjustment for the loss of Qantas 787 orders last month, Boeing’s backlog in units at the end of August was higher than at the end of March.

It hasn’t been a particularly strong year for aircraft orders, but they have run higher than Boeing deliveries.

And Boeing, suppliers and kindred employers in Washington’s aerospace industry have been on a virtual hiring tear recently.

Data from the Washington Employment Security Department shows aerospace employers in Washington added 1,500 to their rolls in June, 1,100 in July.

As the lower chart shows, since the cyclical low in May 2010, Washington’s aerospace payrolls have grown by more than 15,000, a rate of nearly 600 a month.

At the end of July, they reached the highest level in more than a decade. And these are some of the best-paid workers in the state.

This is one of the most important reasons that the Seattle metropolitan area, and to a lesser extend the Evergreen State in general, are oases at a time when the U.S. economy seems balanced between expansion and contraction.

As I said in an earlier post, we should savor this time. There are plenty of things that could spoil the good news for a sector that accounts for a third of all Washington factory jobs.

You know the laundry list: a possible implosion of the Euro zone, uncertainty about whether China can manage a soft landing, the looming ‘fiscal cliff’.

And we don’t know what we don’t know. Who knows what sort of October surprise one or the other of the presidential campaigns may spring between now and November 6? Or whether a Black Swan, an economic disruption that by definition can’t be forecast, lurks just beyond the visible horizon. Stay tuned.