Amazon.com is on a roll. Last Friday, it announced a blockbuster real-estate deal, the purchase of its South Lake Union campus for more than $1 billion.

It unveiled late in summer plans for three high-rise office towers on the edge of downtown Seattle — a quick streetcar ride from its South Lake Union campus — that when completed (at a cost of more than $1 billion) will accommodate as many as 12,000 employees.

Amazon.com is hiring like crazy. As the first chart shows, its head count (full-time and part-time) has grown by nearly 60% in a year.

Pick up a paper these days, and you are likely to read about some new business Amazon.com plans to disrupt. Mobile payments? Check. Bank-type lending to small merchants who sell through its on-line infrastructure? Check. The most sophisticated computing power for entrepreneurs on a pay-as-you-go basis for as little as a few dollars a month? Check.

Want a job at Amazon.com? When I looked recently, there were 131 pages of job listings for Seattle alone. At roughly 20 jobs a page, that’s more than 2,600 job openings. And these aren’t pickers working for the minimum wage at a warehouse. Most require advanced computer, programming, marketing, communication or management skills. I would guess pay for many of the jobs runs to the high five figures if not six. Landing one of these jobs isn’t easy. I’m told the vetting process is every bit as rigorous as at Google or Microsoft.

The New York Times reported in late August that there were more than 600 job openings alone at Amazon Web Services, which has data centers scattered around the globe and a business plan that can put Fortune 500-class computing power into businesses as small as the one-man or one-woman shop. 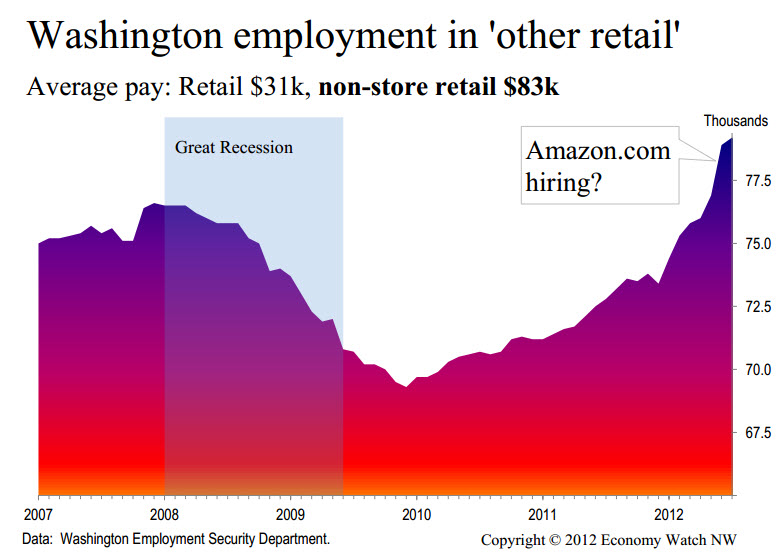 Notoriously secretive, Amazon.com won’t say how many people are on the payroll in the Seattle area. But the number is almost certainly a multiple of 10,000, perhaps two times or more.

The Seattle Times, where excellent real-estate reporting by Eric Pryne is well worth following, reports that Amazon.com has a total of 2.7 million sq. ft. of office space under lease in the South Lake Union area and that it will control  roughly 6.7 million sq. ft. in the Seattle area when announced plans are built out.

For comparison, Microsoft owns roughly 10 million sq. ft. of office space in the Seattle metropolitan area and leases roughly another 5 million. Microsoft reports its Seattle-area employment at about 41,000.

Poke around Washington’s employment statistics and you can find Amazon.com’s footprints. Employment in a subset (labeled “Other retail” ) of Washington’s monthly payroll spreadsheet  has risen by more than 10% since the beginning of 2011 (lower chart).

The tip-off that many of these jobs are at Amazon.com is the high pay for a category called “non-store” retail in a separate quarterly compilation of payroll reports from Washington employers. As noted in the lower chart, average pay in this category is more than $83,000, compared with only about $31,000 for retail generally.

Given the lofty valuation, it is no surprise to find skeptics. Check out the discussions and posts on a web site that is one of my favorites, Seeking Alpha (free, registration may be required), especially this item by Andre Fernon. I understand the skepticism; no tree grows to the sky. But Amazon.com has way too much going on under the hood to bet against it, or so it seems to me.