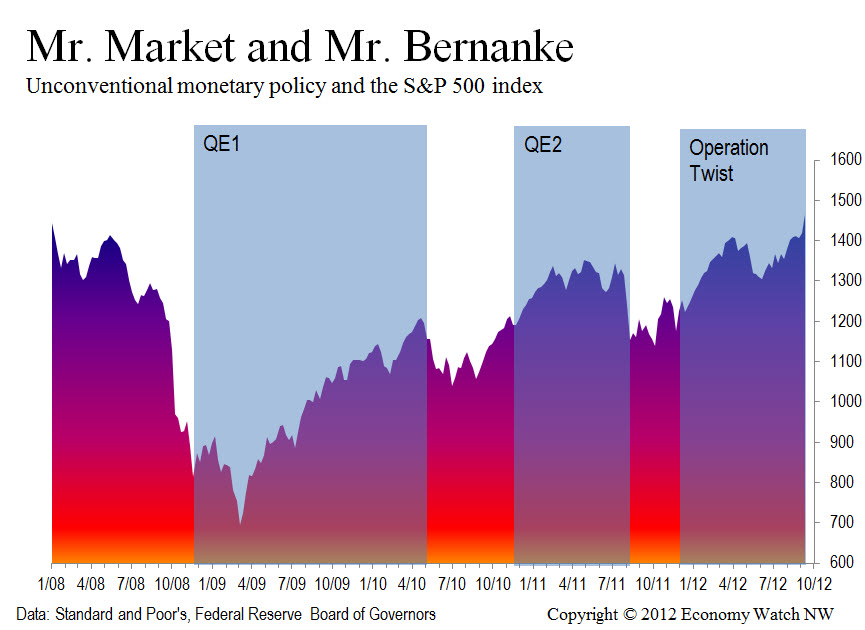 Say what you please about Ben Bernanke’s unconventional monetary policies (quantitative easing, QE for short, and Operation Twist), they’ve been good for the stock market.

The first chart shows that stock prices have roughly doubled, give or take a few percentage points, since Dr. Ben launched the first round of QE in November 2008.

The time lines for the Fed’s unconventional policies are courtesy of the economist Ed Yardeni and can be found here. Yardeni is best known for an errant call — he predicted a recession as a result of Y2K problems at the turn of the millennium.

Yardeni says here that central bankers, including the Fed and European Central Bank (ECB), have turned investors into QE junkies. Here is his take: 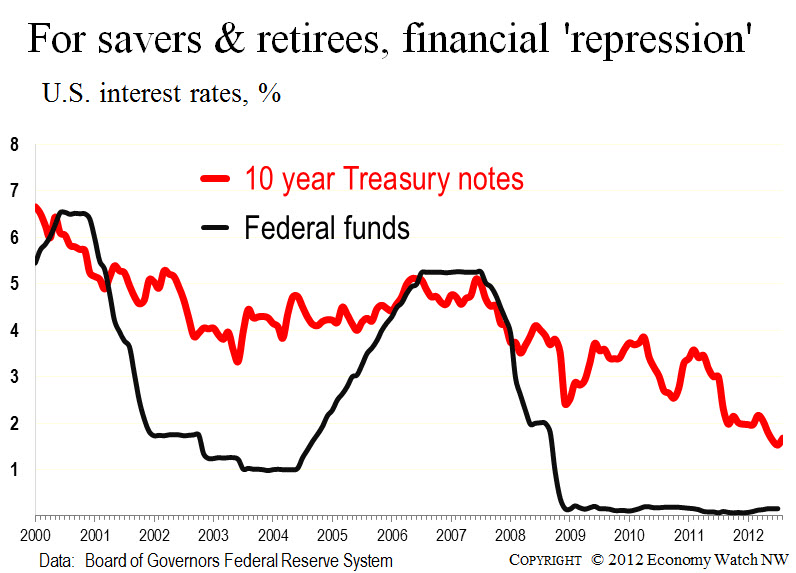 Are you better off than you were when President Obama took office? You sure as heck are if you have a 401(k), assuming you didn’t panic and bail at the bottom (March 2009).

I couldn’t have said it better than Gary Silverman, a New York-based columnist for the Financial Times, who answered the question as follows Sept. 14:

But as anyone who has been around for a while knows, the stock market can be a scary and risky place. If you depend for income on supposed “risk free” assets like insured bank deposits and/or obligations of Uncle Sam, Dr. Ben has not been in your corner.

Bernanke has held the interest rate most directly controlled by the Fed — the fed-funds rate —  essentially at zero since before President Obama was inaugurated.

For lending money to Uncle Sam for a period of 10 years, you will earn a munificent return of about 1.9% currently, or about half the rate of consumer-price inflation. The inflation rate is only about 2% if “volatile” food and energy prices are excluded from the inflation calculation. But how many people can get along these days without eating or, at least occasionally, filling the tank?

You have to go out to seven years to get a return of more than 1% per annum on risk-free Treasury securities (see the Treasury yield-curve data here). Most bank deposits today pay little more than a pittance. Even so, many banks, especially smaller community banks, are having trouble making money. Their margins are being squeezed as older loans with higher rates mature and are paid off.

Keeping interest rates extraordinarily low for a long period is known as “financial repression.” Because it keeps the government’s borrowing costs low, repression enables the fiscal dysfunction that we find in Washington, D.C.

The United States government today borrows roughly 33 cents of every dollar that it spends. The deficit as a per cent of GDP is in double-digit banana-republic territory.

The fiscal squeeze was pulled forward, of course, by the global financial panic of 2008 and the subsequent Great Recession and the slow recovery that I like to call the Great Disappointment.

One way to think about financial repression is that it is a tax on thrift and prudence. Low rates essentially transfer money from savers and investors to the government. Like inflation, financial repression is a more or less silent way of reducing the enormous debt our government has accumulated by, among many other things, not raising taxes to pay for two expensive wars. 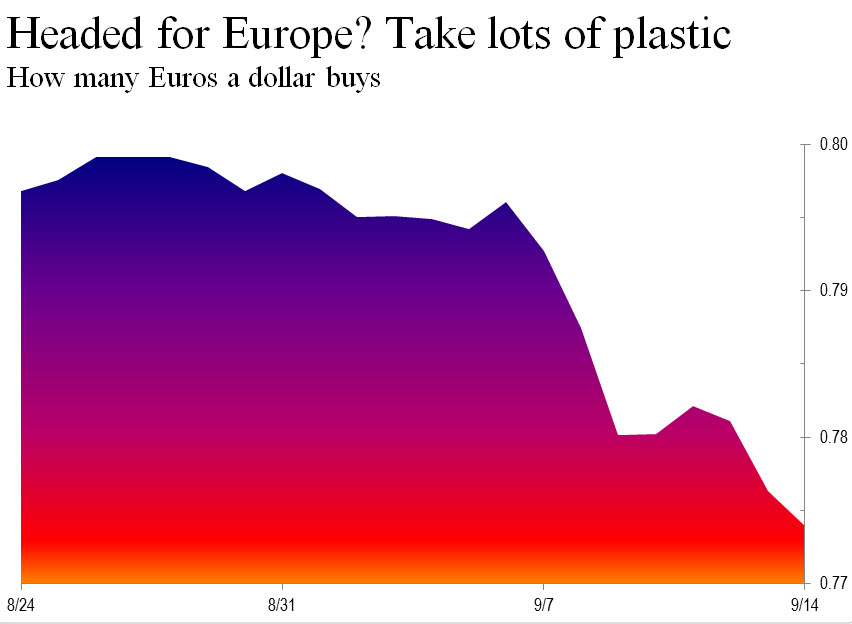 Nor has financial repression been friendly to the dollar. Against the currencies of major U.S. trading partners, the dollar fell 16% between early June 2010 and early May 2011.

The dollar  subsequently recovered, not least because of the continuing banking and sovereign-debt crises in Europe. Currently the dollar stands about where it was in November 2008, when QE1 was launched. But as the final chart shows, the dollar has swooned against the Euro lately. Dollar weakness manifests itself in many ways — $4 gas and $1,700 gold, among many others.

The Fed has a dual mandate — price stability and full employment. Unconventional monetary policy and financial repression are clear threats to the first mandate. They’ve been great for the stock market. The employment market? Not so much, as the unemployment-rates chart shows.

And they paint the Fed into a corner. Its balance sheet has exploded since QE was launched. Its holdings are all interest-rate sensitive. The value of those assets will decline when and if interest rates normalize. It won’t be pretty. Stay tuned.