The first Bush tax cuts (effective before the 9/11 attacks), two post 9/11 wars and the prescription drug benefit for Medicare beneficiaries approved in 2003 pushed the federal income statement back into the red beginning in Fiscal 2002. By today’s standards, the deficits during the period 2002-2008 were relatively modest, averaging only 2.5% of GDP.

Then came the Great Recession (January 2008-June 2009) and its double whammy on the federal ‘fisc’. Receipts, which had peaked at nearly 21% of GDP in Fiscal 2000, collapsed to 15.1% (2008 and 2009). Spending exploded, partly because of stimulus and partly because of automatic shock absorbers like food stamps and unemployment benefits.

As the top chart shows, the one-two punch pushed spending  to more than 25% of GDP in Fiscal 2009. Partly because the economic recovery has been tepid (the Great Disappointment), spending has remained high. The books haven’t been closed on Fiscal 2012 ended Sept. 30. But it likely was the third year in a row with spending slightly exceeding 24% of GDP.

Estimates from the Obama administration’s Office of Management and Budget, to the right in the top chart, show spending falling to 22.2% of GDP by Fiscal 2017, when the deficit will have been tamed from 10.1% of GDP (FY 2009) to 3.0%. Skeptics, of course, think these OMB estimates are too optimistic on both sides of the income statement, spending and receipts.

Governor Romney campaigns on the idea of taking federal spending back to 20% of GDP. This is not going to happen. The reason is simple. Demography is destiny. We spend far more on the old than the young (as illustrated by data from the Urban Institute in the second chart). 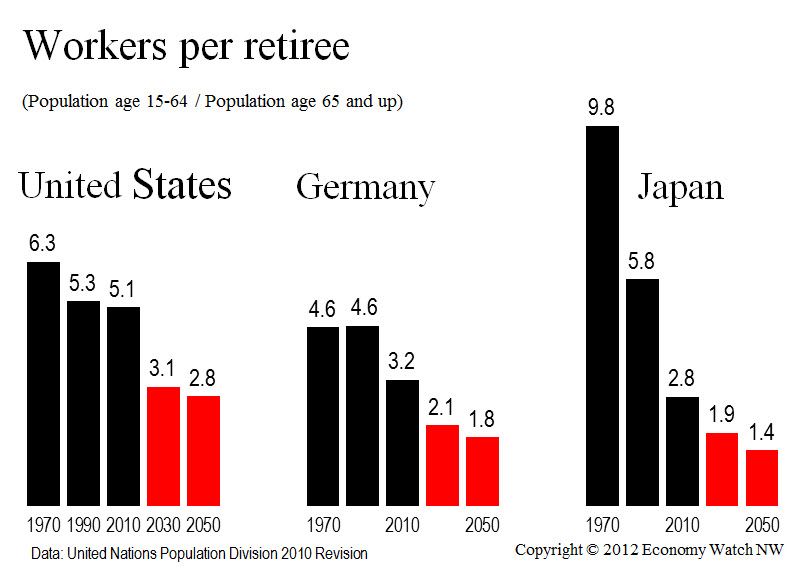 Every year for as far ahead as the eye can see, there will be fewer people of working age to support each person beyond working age. This is true not only in the United States and other advanced economies, but also in the developing economies, including India and China.

The data are out there for everyone to see. Working with latest data from the United Nations Population Division, I’ve charted the ratio of workers to retirees for three large economies, the United States, Germany and Japan over 80 years starting in 1970 (lower chart).

You can quibble about exact outcomes, which will depend among many other things on actual fertility rates, but you can’t quibble about the trend lines.

Population pyramids are a great way to explore the subject. In preparation for a talk to Seattle University students on the role of government, I explored the idea of using the UN population projections by age group to make my own pyramid charts.

Turns out I didn’t have to. The hard work has already been done by a Belgian programming whiz and computer scientist, Martin De Wulf, who has provided an open-source window into the UN data for virtually every country on the globe here. For most countries, the data set stretches in five-year increments from 1950 to 2100. With a hat tip to Mr. De Wulf, I say enjoy. And start saving more, a lot more. There will be fewer people working to support you in retirement. That’s a forecast you can take to the bank.

On the home page of the UN Population Division, you can find a fascinating wall chart on the aging of the global population. Here are some startling bullet points: