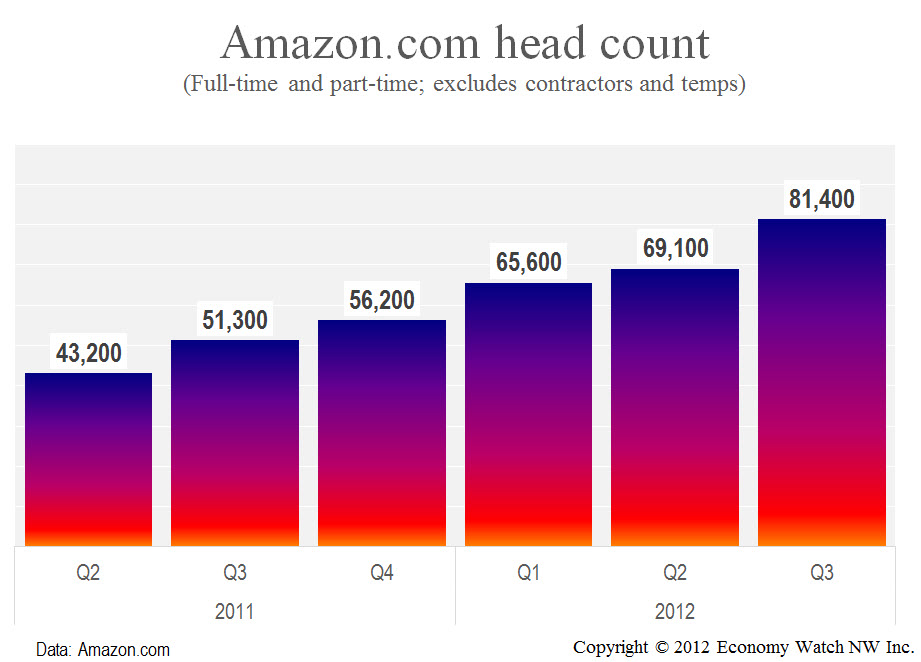 No wonder Amazon.com lost money in Q3. A point I have been making in my Fall 2012 speeches is that the economy of the Seattle area has been doing well in part because both Boeing and Amazon.com are on what can only be called hiring sprees.

On its web site as recently as early this week, Amazon listed 131 pages of job openings — for Seattle. At 20 per page, that’s 2,600 job openings. And these aren’t minimum-wage part-time pickers at warehouses. As I’ve written before, page through the job descriptions, and you’ll see that Amazon.com is seeking highly skilled employees. I would guess that many of the openings are for positions that pay in the mid- to high five figures.

Amazon.com plays its cards close to the vest. It refuses to tell Wall Street how many Kindles it sells or whether they are profitable. It discloses as little as possible, as little as it can get away with legally.

It won’t tell anyone how many people it employs in the Seattle area, for example.

But it does disclose, once a quarter in an SEC filing, its head count.

I haven’t seen it in any of the news reports yet, but the latest filing indicates that Amazon.com hired at the rate of nearly 950 a week in the July-September quarter. Head count increased by 12,300 to 81,400. That’s an 18% increase in 90 days.

Amazon.com’s head count has grown 59% in a year’s time.

The company’s filings do not break out employment between full-time and part-time. But the numbers exclude, as the chart indicates, contractors and temps.

Amazon.com’s hiring spree is the best evidence I’ve seen that Jeff Bezon is not managing the company for the next quarter’s earnings.