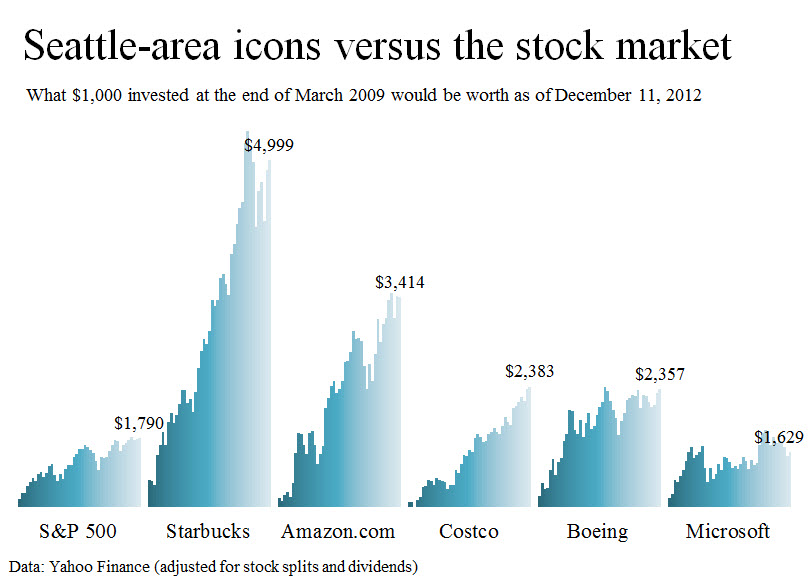 Skip the pricey drink and buy the stock. If you had put $1,000 into Starbucks stock at the end of March 2009, a few days following the bottom of the current stock-market cycle, you would be sitting on a gain of roughly five to one.

No one can know whether the next five years will be as prosperous for Starbucks, but buying the stock instead of the latte is still probably a good idea.

The consensus estimate puts the earnings-per-share growth rate for Starbucks for the next five years at more than 15%. That’s almost double the 8.6% consensus for the S&P 500. Starbucks stock? Make mine a double shot.

The chart shows how $1,000 invested in four other iconic Seattle area companies at the market’s cyclical low about 3 1/2 years ago would have fared. Amazon.com would have been good for a triple, Costco and Boeing more than a double. The only laggard is giant Microsoft. It has been dead weight for the better part of a decade.

The Economist, far and away my favorite weekly magazine, put four “warring giants” of the Internet on its cover two weeks ago. They were represented as giant squid grappling with one another for the mind-share of global consumers. Amazon.com made the cover, along with Facebook, Google and, of course, Apple. Microsoft’s absence was a sign of how far it has fallen behind as computing has migrated rapidly from the desktop to mobile devices. Microsoft earnings are expected to grow at an annual rate of only about 7%.

I’m not in the business of giving investment advice or money management. And as they say in the fine print, past performance is no guarantee of future results. But if I had to pick among the five for the next few years, I’d have to go with Amazon.com despite the sky-high valuation.

Analysts who follow Amazon expect earnings per share to grow at a 25% rate over the next five years. Amazon’s margins are tiny; it will make less than a cent on each dollar of revenue this year. Microsoft by contrast brings more than 30 cents of each revenue dollar to the bottom line. But Wall Street is willing to give Amazon a pass on today’s low profit margins, assuming that the giant e-commerce platform that it continues to build out will eventually become profitable.

Starbucks would be an easy No. 2 pick based on its expected growth. Both Boeing, at 13%, and Costco, at 10%, are expected to grow earnings per share faster than the S&P 500. I wouldn’t touch Microsoft until there is evidence of a widespread corporate takeup of its new operating system and a corresponding return to much more rapid top-line growth.