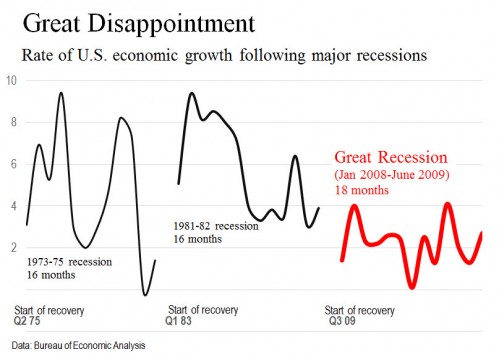 So we have just started Year 5 of N-ZIRP, the Fed’s near-zero-interest-rate policy, and it is working so well that the Fed will have to keep printing money. What’s wrong with this picture?

In fact, despite a massive expansion of the Fed’s balance sheet, and some of the lowest interest rates since biblical times, the recovery remains anemic by any standard.

Real economic growth in the 13 quarters since the end of the Great Recession has averaged only 2.2%. In only two quarters did the rate of growth exceed 4.0%.

I call it the “Great Disappointment,” with, I believe, some justification. Before the Great Recession, the lengthiest of the 11 recessions since World War II were downturns that ended in 1975 and 1982, both at 16 months.

Four years ago this month the Federal Reserve began its epic program of monetary easing to rescue an economy in recession. On Wednesday, Chairman Ben Bernanke declared that this has worked so well that the Fed must keep easing money for as long as anyone can predict in order to save a still-sputtering recovery.

The Journal rightly calls this a contradiction. I can’t help but be reminded of a waggish definition of insanity: Doing the same thing over and over again and expecting a different outcome.

I have said before in this space that low interest rates are a form of default. They transfer wealth from savers to borrowers.

And low interest rates are a sign of the times. They reflect the fact that the promises that have been made to future retirees, especially with respect to increasingly expensive health care, simply cannot be kept at anything near today’s mix of weak economic growth and relatively low levels of income taxation.

Politicians are naturally disinclined to tell their constituents they will have to make do with less than they expected.

Money-printing will eventually lead to higher inflation, which will wash away today’s unsustainable levels of government indebtedness, to the great disadvantage of anyone holding Uncle Sam’s paper. My hunch is that the erosion of purchasing power will be gradual, that it will happen over an extended period of time. But we are in uncharted waters, and a sudden panic or crisis cannot be ruled out.