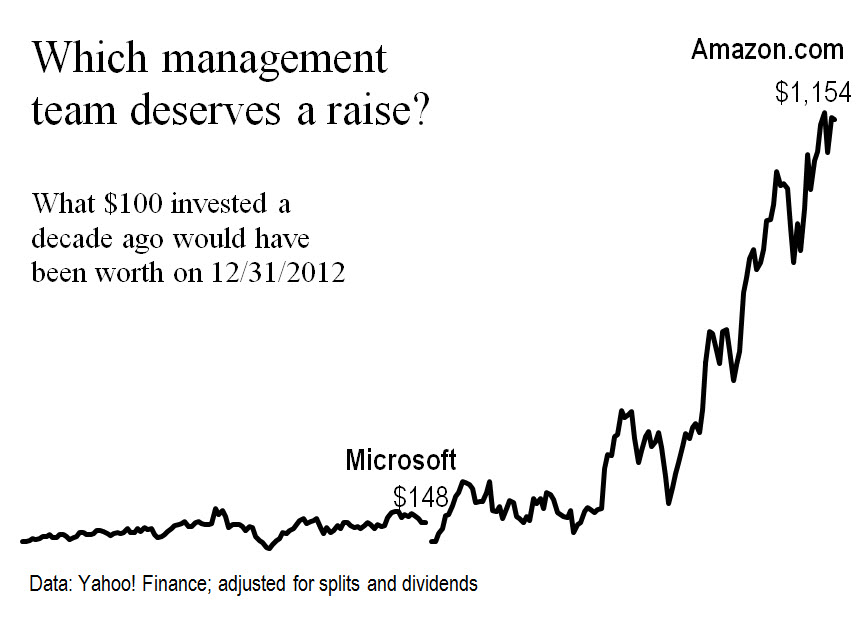 Three questions that we’ll know the answers to before 2013 is over:

1. Will Steve Ballmer remain in the driver’s seat at Microsoft? He’s been responsible for day-to-day operations for more than 14 years and CEO for a nice round dozen years. During his tenure, Microsoft has missed the boat on virtually every key technology development, most notably mobile telephony and the related mobile Internet tsunami.

Significantly, Microsoft was absent from the cover of the Dec. 1, 2012, edition of the Economist, where “the four giants of the internet age—Google, Apple, Facebook and Amazon” were represented as giant squid, grappling with one another for mind-share. The not-so-subtle message: Microsoft no longer is even in the same league.

But Microsoft’s revenue line has been trending down. Its shares have been range-bound for the past decade and have underperformed the Standard and Poor’s 500 by a wide margin. The nearby chart shows how poorly its stock has done over the past decade in comparison with hard-charging Amazon.com.

I see 2013 as a crucial year for Microsoft and, perhaps, for Mr. Ballmer. Will major customers take up the new Windows 8 operating system? Will consumers buy its new tablet computers? Can Microsoft gain any traction in mobile phones against Samsung and Apple?

Can Microsoft transition its cash-cow Office productivity suite from a one-license-per-PC model to an annual subscription model and prevent more customers from defecting to Google’s lower-cost cloud-based offerings?

Directors expressed some impatience with the lack of progress by cutting Ballmer’s bonus in the fiscal year that ended in June. Changing CEOs is no guarantee of fixing a company that is running on the fumes of past glory; just ask directors of Hewlett Packard. The pressure on Ballmer to show progress in key areas will be enormous in 2013. If results are poor, I wouldn’t be surprised to see his job on the line.

2. Amazon.com, buy, sell or hold? In almost every way, Amazon.com was the Seattle area’s company of the year in 2012. For starters, there was founder and CEO Jeff Bezos on the cover of Fortune magazine in December as its businessperson of the year.

In the waning days of 2012, Amazon closed on its $1.16-billion purchase of its South Lake Union campus from Paul Allen’s Vulcan Real Estate, financed in part with $3 billion borrowed in the bond market at ultra-cheap interest rates. Amazon is on the verge of building three new office towers on the edge of downtown Seattle.

Real-estate consultant Kip Spencer told the Seattle Times that by the end of the decade, Amazon.com could occupy as much as 8 million square feet of downtown Seattle office space. The Times noted that Washington Mutual, the largest Seattle office tenant previously, occupied a mere 1.6 million sq. ft. before it collapsed in 2008.

Amazon.com inevitably is compared with Apple. The Fortune cover article listed some of the similarities.

[CEO Jeff] Bezos insists on a long-term orientation for Amazon, just as [the late Steve] Jobs did …. He treats Wall Street with mild disdain, just as Jobs did. Amazon employees, like their counterparts in Cupertino, Calif., are known for being tightlipped on the subject of their respective companies. As Jobs did, Bezos has an extraordinarily loyal, long-serving, and close-knit brain trust of top executives who can channel his authority inside and outside the company.

But as Fortune noted, the comparison goes only so far. Apple “uses its platform to sell high-profit devices; Amazon sells low- or no-profit devices to pump ever more volume onto its platform.” A favorite Bezos aphorism, Fortune reports, is “Your margin is my opportunity.”

Based on consensus estimates, Amazon.com will have earned less than a penny per dollar of sales in 2012. Microsoft earns more than 30 cents per dollar of after taxes. Yet Amazon sells at more than 180 times normalized annual earnings versus about 10 times for Microsoft. Analysts expect Amazon.com to grow earnings per share at a rate of 25% per year for the next five years versus only about 7% for Microsoft.

As I noted here, Amazon.com has been hiring like crazy. Last I looked, it listed several hundred job openings for the Seattle area on its web site.

I’m not in the business of giving investment advice. If I were, I would be comfortable advising long-term investors to buy Amazon.com stock. Bezos still has a lot of runway ahead of him, lots of high-margin businesses that he can disrupt with the unique infrastructure he continues to build.

3. Is Boeing’s backlog, like a block of Swiss cheese, full of holes. Boeing had more than 4,300 firm orders in backlog at the end of November, more than seven years of production at current rates, including more than 3,000 737s and more than 800 787s. At some point in the first quarter of 2013, aerospace employment in Washington is likely to exceed 100,000 for the first time since the late 1990s. Although the final tally is not yet in, Boeing likely delivered more aircraft than Airbus in 2012 for the first time in many years. 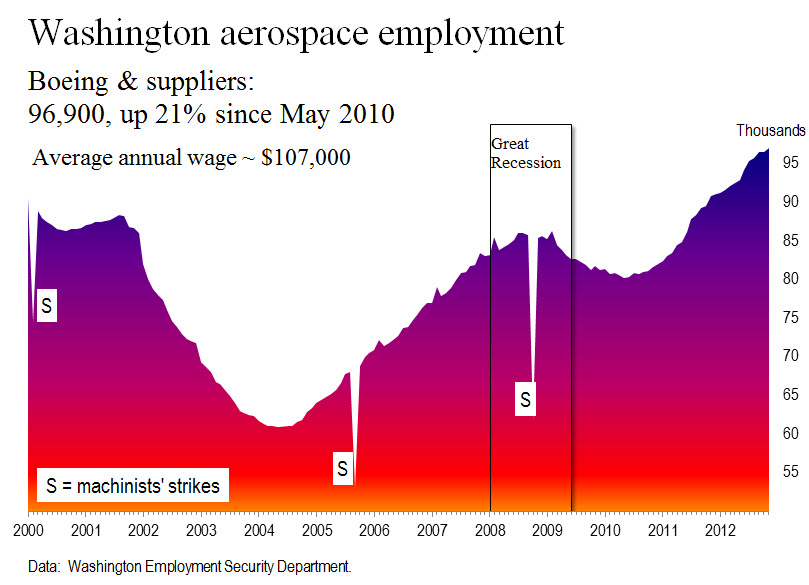 That’s the good news. But we know only too well in Washington State that the business of making and selling commercial airplanes is highly cyclical. Already some are warning that we are at the peak of the order cycle.

London-based analyst Nick Cunningham of Agency Partners is quoted in the Financial Times (Jan. 2, 2013) to the effect that both Boeing and Airbus will cut production after 2015.

My take is that the backlog is solid — unless the global economy runs off the rails. The majority of the planes in the backlog are for offshore customers. All customers, domestic or foreign, need newer more fuel-efficient planes to be competitive. And roughly half the planes to be delivered in the next 10 years are for replacement of existing planes rather than for incremental capacity.

Lacking some large external shock that by definition cannot be forecast, I expect that aerospace orders, production and employment will remain in an uptrend in 2013.