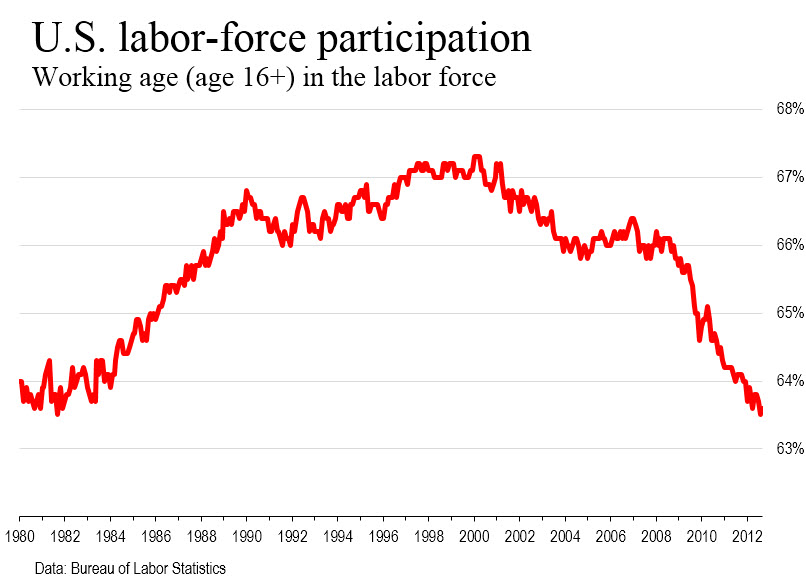 Some things I hope to cover on the business-economy segment on KUOW today:

U.S. economy: The Bureau of Economic Analysis announced October 26 that the U.S. economy grew at annual rate of 2.0% in the July-September quarter, much better than the 1.3% rate in the summer quarter.

In real terms adjusted for inflation, the U.S. economy has grown about 2.2% over the past 12 months, really nothing to write home about. That said, it was the fastest rate of growth for any 12-month period since the 12-month stretch ended March 2011.

Consumer spending accounted for most of the growth. Personal income grew at the fastest rate since winter in September, the final month of the quarter. Consumers lately have shown an increasing propensity to borrow, indicating improved confidence in their prospects.

Spending on durable goods, things like autos and appliances, grew at the fastest rate. Businesses by contrast went on strike. Spending on non-residential structures, for example, contracted sharply, and spending on equipment and software flat-lined.

On the outlook, note this from Wall Street economist Ed Yardeni today:

The US economy continues to grow at a lackluster pace. Indeed, since Q3-2009, when the recovery started, through Q3-2012, real GDP is up just 7.2%, weaker than all of the previous six recoveries, which had an average gain of 15.8% over the comparable 13-quarter period. Real consumer spending is up 7.4% during the current recovery, also weaker than the previous six and well below their average gain of 14.5%.

The negative spin on this subpar growth from the Bear camp is that it’s very close to “stall speed.” So they’ve been predicting a “double-dip” recession ever since the bull market started in March 2009. Now they are licking their chops about the fiscal cliff, which will certainly cause a recession, if it isn’t averted.

[My colleague] and I have spotted a few “soft patches” in the economy during the latest recovery, but we insisted that GDP would continue to grow. Now we are predicting a “Second Recovery” for the US in 2013, led by housing and autos. We see lots of pent-up demand that could boost growth next year. We think this could happen no matter who wins next Tuesday.

Dr. Ed also commented that “the latest quarter’s growth was boosted by a 9.6% increase in federal government spending, mostly on defense. Without that contribution, real GDP would have been up only 1.3%.”

We’ll know more about the economy generally on Friday, when the  Bureau of Labor Statistics is scheduled to release the October employment report. Initial unemployment claims suggest a slightly improving trend.

The October employment data, including the one number that everyone will be able to cite the minute it is announced, the unemployment rate, will be the last major government headline number before the election.

My hunch is that the headline unemployment rate will remain below 8% (the September rate was 7.8%), but that declining labor-force participation will be a contributor as it has been for more than a decade (see chart; you are not counted as unemployed if you have simply dropped out of the labor force). I wouldn’t be surprised if  conspiracy theorists such as Jack Welch, late of General Electric, howl again that the Obama administration is cooking the books. I trust the BLS not to cook the  books.

Microsoft: October has been the perhaps the biggest month in many years for  Microsoft. Start with the introduction/launch of Windows 8. Jason Pontin, editor/publisher of the MIT Technology Review, calls it the biggest gamble by a technology company since Intel abandoned the production of memory chips in favor of logic chips/microprocessors at the dawn of the personal-computer age 30-odd years ago.

Microsoft just launched a new version of its mobile-phone software in an attempt to catch up with Apple and Samsung in a fast-growing category where it has never achieved more than miniscule market share.

And, most momentously, it has brought out a tablet computer, the Surface, to compete with the Apple iPad, Kindle reader and other handhelds. This puts Microsoft into direct competition with the companies that make the personal computers on which its software runs – Hewlett-Packard, Dell, Lenovo, Samsung and many others. Microsoft has been successful with its game hardware, the Xbox, but otherwise makes relatively little in the way of hardware.

Reviews of the Surface tablet are mixed. David Pogue of the New York Times, praised the “bold, envelope-pushing” design, but complained that the product is let down by what is supposed to be Microsoft’s specialty, software. Walt Mossberg of the Wall Street Journal opined that if you can live with the paucity of apps and too-short battery life, the Surface, equipped out of the box with Microsoft’s most-used Office software, may give users “the productivity some miss in other tablets.”

Gloves come off, however, in the reviews of Windows 8. Pontin of MIT notes that there are more than a billion users of Windows around the world who, when they boot up a new laptop provided by the IT department or a new touch-screen computer that they bought on their own, will “recognize nothing” because the interface has changed dramatically. A New York Times Page 1 headline asked rhetorically, “Where’s the Start Button.”

The dramatic change in the interface raises the question whether corporate IT departments will take up the OS rapidly. Pontin’s verdict is harsh. Years ago, he writes, Microsoft dominated in its foundational business, selling the “platform” – “the software upon which other developers’ software must run and with which hardware must work.” But today the web is the platform for most computing, and Apple and Google with iOS and Android provide the operating systems for mobile devices, increasingly the devices of choice. We are no longer chained to the desktop or even laptop; we live in a world of BYOD (Bring Your Own Device).

Pontin writes that “The sharp edges between business and consumer computing have melted. Microsoft had no choice but to try something new. . . [Microsoft] knows it’s slowly dying, and declines to accept its fate.” If you work for the Evil Empire of Redmond, or own its stock, that hurts.

Amazon.com: As I illustrated a few days ago here, Amazon.com’s head count grew by more than 12,000 in the July-September quarter, to more than 81,000. The company still lists more than 2,000 job openings just in Seattle alone on its web site, and hundreds more at other locations.

And how about a private institution respected for its research prowess, Northeastern University, setting up a branch campus hard by Amazon’s South Lake Union complex. I loved the quote in the Seattle Times from the head of NU in answer to the question of why Seattle. Because Seattle is a “very vibrant urban center” that is the cradle of “industries of the future.” As the beer commercial says, it doesn’t get much better than that.