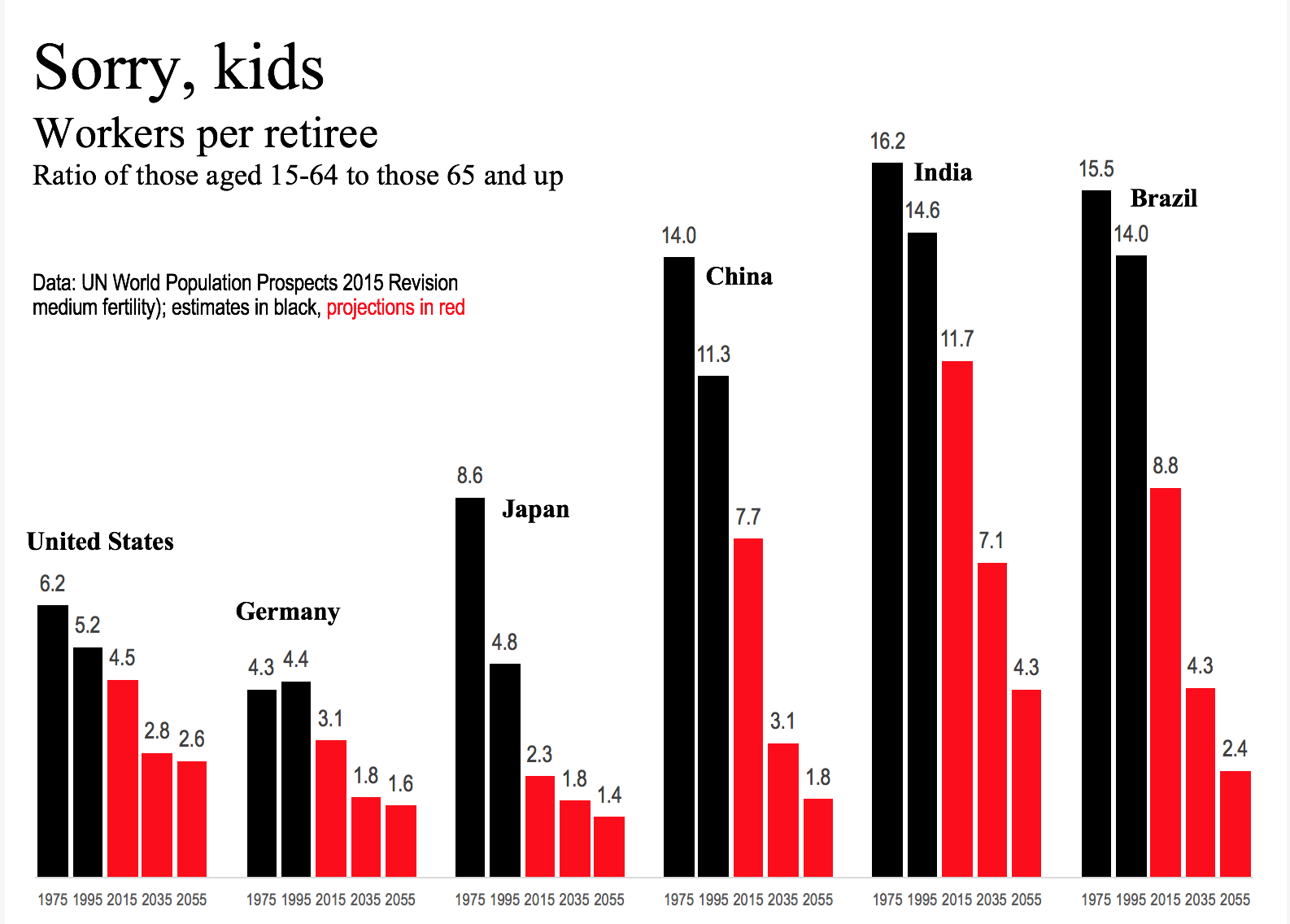 Worried about your Social Security benefits? You ought to be.

Whether you are in your 70s or your 20s , the number of workers taxed to support you in our pay-as-you-go social-insurance system are or will be fewer than supported your parents and grandparents.

We’re living longer and having fewer children. The consequences of these two facts don’t seem very significant if you  look at them just from year to year. But chart them at 20-year intervals, easy using the excellent population projections of the United Nations, and you can see that they have huge implications for the future. As the old saw in economics has it, “Demography is destiny.”

In the United States 40 years ago,  there were more than six in the working-age cohort (ages 15 to 64) for every senior (65 and up).  Today, there are only 4.5. Forty years from now, the ratio will be about 2.6 to 1, based on medium fertility. Keep in mind that not all of those of working age are working; labor-force participation is falling generally, and notably among the young.

You think we’re in trouble? Look at Japan. Forty years ago, there were nearly nine workers for each person of retirement age. Today the ratio is about three to one. Japan has one of the globe’s lowest birth rates. The average age is rising rapidly. By 2055, there will be only three of working age for every two of retirement age.

And, as the chart shows, these trends are not confined to the rich world. China had 14 people of working age for each senior 40 years ago. Forty years from now, partly due to its one-child policy, it will have roughly the same ratio as Japan. Young people in India and Brazil will face slightly more moderate burdens supporting their elders, but the trends are the same. Fewer workers each year paying into the social-insurance funds that finance both income support and health-care benefits for those in their golden years.

Writing in the Wall Street Journal recently, Ruchir Sharma, head of emerging markets and global macro at Morgan Stanley Investment Management, noted that today’s immigrant bashing — the rant that immigrants will “steal jobs, depress wages and upend local ways of life” — is badly out of date.

Beginning in about 1990, he notes, the globe’s population growth rate began to decline. It now stands at about 1% annually, down by half from the post-World War II average of about 2%. Yes, the globe’s population is still growing, thanks to higher-than-average fertility in less-developed areas, especially Africa. U.N. projections put peak population at about 9.7 billion around 2050, compared with today’s 7.3 billion.

Yet the collapse of the birth rate, Sharma writes, “is seriously undermining potential economic growth … and goes a long way toward explaining the sluggish recovery from the crisis of 2008.” Sharma writes that

Falling fertility rates typically affect the economy after a lag of 15 years, as babies grow into working-age adults. But oddly, anti-immigrant sentiment has erupted precisely as the economic fallout of the birthrate implosion has become clearly visible. This year, for the first time in the postwar era, China’s working-age population is expected to decline—and it is likely to continue falling in coming years. The emerging world is going to have many fewer people to export than the anti-immigrant populists in the developed world imagine.

Sharma notes that Donald Trump’s bashing of Mexico misses the boat. “Mexico’s fertility rate [the number of children each woman has over her child-bearing years] has collapsed to 2.3, its working-age population is destined to drop, and in recent years at least as many Mexicans have left as have entered the U.S.”

Germany is welcoming refugees from the war-torn Middle East at a record rate, up to 800,000 this year. But Germany also has the globe’s lowest birth rate. To maintain the balance between its working-age population and its retirees, Sharma writes, Germany would have to accept 1.5 million immigrants a year for the next 15 years. Sharma concludes:

Only the countries that adapt early to the population implosion will thrive in the baby-bust era. Meanwhile, the controversies over immigrants “stealing jobs” are likely to fade in the coming years, and give way to a new war for talent.